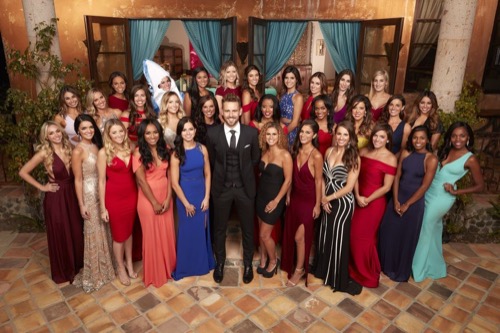 The Bachelor 2017 airs on ABC this evening with an all new Monday, January 2, 2016, season 21 premiere and we have your The Bachelor recap below. On tonight’s The Bachelor season 21 premiere as per the ABC synopsis, “Season 21 begins with Nick Viall meeting 30 beautiful bachelorettes, each clamoring for his attention and the coveted first-impression rose. By the end of the initial rose ceremony, only 22 ladies remain to continue on their path to “win Nick’s heart. But before the ladies arrive, Sean Lowe, Chris Soules and Ben Higgins offer Nick advice on searching for his soul mate.

Tonight’s Season 21 premiere of The Bachelor kicks off tonight with Nick Viall kicking off his search for love…again. Hopefully, the fourth time is the charm for the Bachelorette and Bachelor In Paradise alum. Episode 1 of this season kicks off with a clip of Nick Viall spending time with his family. Before Nick left to begin filming The Bachelor, his little sister Isabella gave him some great advice to help him find his future wife.

Nick Viall’s little sister wasn’t the only one that gave him some advice. The new Bachelor also sat down with alums Sean Lowe, Chris Soules, and Ben Higgins. Sean is impressed with how much Nick has changed over the years, and he hopes that America will realize that he is really a “good dude.” Nick confesses to the other Bachelors that he is super nervous about meeting the women.

Ben Higgins advises Nick to “just be himself” and trust himself. Ben warns him not to lose himself in the process, and to “just be Nick.”

It’s finally time for Nick to meet the women that are dying to date him, and become Mrs. Viall. And, of course the moment we always look forward to, the awkward and hilarious limo entrances.

Before Nick gets to meet his girls, we get a sneak peak of who will be dating him this season. Of course, there are some girls that seem to totally have their lives together and are ready for love – then there are some totally whacky girls that were clearly cast for shock value.

The most interesting woman in the sneak peek is a girl named Liz, she reveals that she actually met Nick Viall at Jade and Tanner’s wedding last year and they spent the whole night drinking and chatting. She implies that Nick was totally into her and even asked for her phone number. It will definitely be entertaining to see how he reacts when she climbs out of the limo.

Nick Viall takes his place in front of the mansion and Chris Harrison greets him and gives him a pep-talk before the women start arriving.

Limo number one arrives. The first woman to climb out is Danielle L, a small business owner from California. Nick seems impressed by her, they both giggle awkwardly and she teases that she can’t wait to see him inside.

Next is 24-year-old Elizabeth, a marketing manager from Texas. Elizabeth confesses that she is nervous and Nick flirts that she is “looking good.”

Rachel, a 31-year-old attorney, climbs out of the limo next in a red dress. Rachel has a corny joke about “making a play for Nick’s heart.”

Christen, a wedding videographer from Tulsa is up next, she is wearing a Big Bird colored yellow dress and carrying a bizarre oriental fan. Christen giggles that she can’t believe she is meeting a celebrity…awkward.
Taylor, a 23 year old mental health counselor from Seattle arrives next, in another red dress. She doesn’t make the great first impression and tells Nick that all of her friends think that he is a “a—–e.”

Angela, a model from South Caroline arrives next, wearing another red dress. She’s totally star-struck and gets choked up. Apparently, Angela only joined the Bachelor because she wanted to date Nick.

Up next is Lauren, a 30 year law student in a super sparkly gown. Lauren reveals that she and Nick have a lot in common, she has a horrible last name too. Apparently, her name is “Lauren Hussey.”

Dominique, a 25 year old restaurant server arrives next, also wearing a red dress. Did the producers not plan accordingly or is this some kind of inside joke that we are not getting?Olivia, a

Olivia, a 25 year old apparel sales woman from Alaska introduces herself next. She teaches Nick how to Eskimo kiss before she sachets inside in her fur coat.

Jasmine G goes for a more classic entrance. Jasmine is a 2 year old pro basketball dancer hailing from San Francisco, California. Jasmine says she brought a friend along with her, and Neil Lane climbs out of the limo. Apparently, Jasmine already picked out the ring that she want Nick to propose to her with.

Canadian native Hailey has watched The Bachelorette and knows that Nick is a “really sexual guy,” so she goes for a seductive entrance. Nick seems thrilled when she reveals that she isn’t wearing any underwear and even goes in for a second hug.

Astrid flirts with Nick and talks about her breasts when she gets out of the limo, but she says it all in German and Nick has no idea what she is saying.

Corinna pulls up in the next limo, and steps out wearing a red dress. She gives Nick a hug token and tells him to cash in on it when he comes inside.

Danielle M. arrives in her red dress next, she brought a gift for Nick. Apparently, her father makes maple syrup, she lets Nick lick some syrup off her finger.

Meanwhile inside, the drinks are already flowing and the girls are already getting catty. And, they just realized that there are over 15 girls wearing red dresses.

Outside, two more nurses arrive with corny jokes, and they’re wearing red dresses. It will be a miracle if Nick can tell them all apart.

Lacey arrives next, riding on a camel. She heard that Nick “likes a good hump.” And, she will easily go down in history as one of the greatest Bachelor entrances of all time.

Alexis is a dolphin trainer, so she arrived dressed in a dolphin costume. It would have been pretty awesome, but you can’t really compete with a girl on a camel. Inside, the girls point out that she is actually wearing a shark costume, but Alexis insists she is a dolphin…

Nick has officially met all 30 women, he heads inside to mingle with the girls and get to know them a little more. Of course, everyone is freaking out because the first impression rose is sitting in the middle of the table.
Nick and Corinne are hitting it off outside. She gives him some more tokens after he cashes in on his hug token.

Next, Nick chats with Vanessa. She explains that her friend submitted her to the show and she was really hoping that Nick would be named the next Bachelor. Nick and Vanessa are getting to know each other and then Corinne comes out of nowhere and interrupts and says that she needs to talk to him.

Then, Corinne plants on a kiss on him. All of the girls watch from outside the window and are shocked that Corinne is already kissing him – and hogging all of his time. The claws are already starting to come out.

The girls realize that time is ticking away, and most of them haven’t had any alone time with Nick. They all start falling all over each other and trying to get Nick’s attention. It’s almost embarrassing to watch. Jasmine is getting super frustrated because she has tried to talk to Nick multiple times and has gotten blown off. She heads outside and starts crying and pounding drinks.

Meanwhile, Alexis doesn’t seem too upset that Nick hasn’t spent a ton of time with her. She heads to the pool and goes for a dip in her dolphin costume. Nick jokes with her and tells her that is she takes her dolphin/shark costume off, then he will definitely send her home.

Nick finally tracks down Liz, they have a super awkward talk about their hook-up from Jade and Tanner’s wedding. It turns out, Nick isn’t super thrilled to see her. His feelings were actually hurt that she never contacted him after they spent the night together.

It’s time for Nick to hand out the first impression rose, and he shocks everyone by giving it to Rachel. The girls didn’t even realize that he had talked to her and spent any time with her. Corinne is not too thrilled, she was certain she was getting the first rose since she gave him the first kiss.

Chris Harrison arrives and announces that it is time for the very first rose ceremony. Hopefully, Nick can remember all of their names.

The rest of the girls say their awkward goodbyes and head home. Nick and the remaining girls all toast and celebrate the beginning of their journey on The Bachelor.