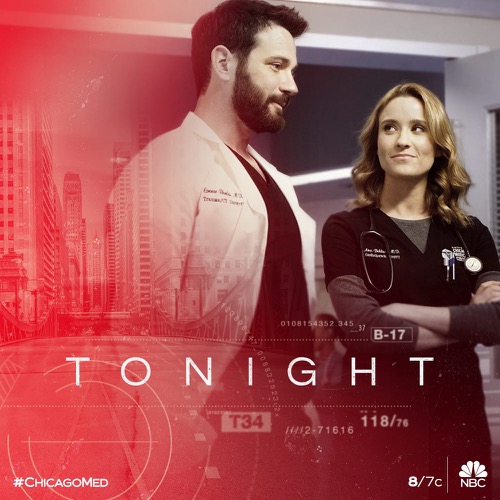 Tonight on NBC their medical drama Chicago Med airs with an all-new Wednesday, October 17, 2018, episode and we have your Chicago Med recap below. On tonight’s Chicago Med season 4 episode 4 called, “Backed Against the Wall,” as per the NBC synopsis,“Dr. Halstead gets an unplanned visit from the CPD; Ethan is skeptical of a woman who is experiencing chronic pain; Natalie tends to a cancer patient whose brother has strong feelings on why he is refusing to lend his assistance.”

Dr. Choi was finally meeting his sister’s boyfriend on tonight’s all new episode of “Chicago Med”. He’s been asking to meet this boyfriend since he found his sister was pregnant and it turns out the boyfriend had been doing the same. Bernie was interested in being a part of Emily’s life. He knew that he and Emily shouldnt have gotten together until she had been a year clean however he claims he loves and she says she loves him. Bernie agreed to meet at the hospital and he had been as sweet as can be. He told Dr. Choi that he wanted to be with Emily and the doctor hadnt said anything bad. He just played along until he could talk to April and that’s when he took the moment to complain.

Dr. Choi thought Bernie was too old. He was more than twenty years older than Emily and the doctor thought his sister didn’t even look her age. Choi complained to April how Emily looks twevlve and so he thought her relationship with Bernie was unhealthy. The doctor said his sister likes throwing herself at guys that didn’t deserve her and so not only was he judging his sister, but this guy as well because of Emily’s past. Emily had a problem with taking responsibilty for herself much less her baby and so Dr. Choi thought he should put an end to this relationship. He talked about it with April and she thought that maybe he wasn’t seeing things too clearly. She wanted him to think about his actions before he made a mistake.

Choi hadn’t even gotten the chance to think about it. He had gotten a new patient who was complaining about pain in her lower back and the patient was being difficult abut the student doctor. Dr. McNeal was just trying to help and the patient kept pushing him away until she ultimately revealed what she wanted. The patient wanted pain medication. She was sure that her pain demanded some of the heavier stuff and she talked about her past history which indicated she had talked to doctors before yet she didn’t want to get further testing to see why this “pain” continued coming back. She just wanted drugs and Dr. Choi suspected that could be the only reason why she wanted to be treated.

Dr. Choi asked Dr. McNeal to look up the patient. He did and he couldn’t find a Nora Blake though the guys remembered that Nora said she was a partner at her firm and they had remembered the firm’s name. They looked that up and the patient’s real name was Brenna MacDouglas. It seems she gave a fake name so that no one could track her frequent usage of precription pills and it would have worked again for her if she hadn’t been so impatient. The doctors found out that she was lying and they moved to put a stop it because they were other patients that actually needed help. There was a patient with an unique form of leukemia. She needed stem cells to live and she couldn’t get help the normal way because she didn’t have insurance.

This other patient was an illegal immigrant. She was filing for a green card because she was married to an American citizen and so it was just going to take time until her application was either approved or rejected. Until then, she didn’t have access to her husband’s insurance and she couldnt get stem cells from others. So she and her doctors turned to her brother Manny for help. He didn’t want to at first because he was also undocumented immigrant and so he only gave in because that was the only way to save his sister’s life. The doctors prepped him and he was all ready to go when ICE showed up. They took Manny in without a second thought and so now there was no one that could save his sister Linda or be with his pregnant wife. And this all happened because of Brenna.

Brenna didn’t like being told “no”. She said it didn’t matter that she hadn’t used her real name because she still had insurance. Brenna said she was willing to pay all the costs necessary to get her pain medication and she demanded those be handed to her right then, but Dr. Choi wasn’t having it. He said they could help her get for her addiction problem and she kicked off because she heard an illegal immigrant was getting treatment while she was being denied what she wanted. Brenna then asked for Dr. Choi’s boss and he handed the other man right over. Unfortunately, Brenna complained about how this man had also caused a fight with his brother-in-law because he hadnt wanted to give his stem cells in case he got deported for it and so she launched the investigation.

The hospital hadn’t wanted to risk getting into a battle of wills with federal agents and so there was no way Manny could be allowed to stay for his family. He was gone and now Linda’s options are her young son. The same son who would have to go through pain just to get her those stem cells and so neither Linda nor her husband were sure they wanted to expose their son to that. And meanwhile Brenna got to go home because she hadn’t committed a crime and so her walking away had been a blow for both McNeal and Choi. Choi had later talked to Bernie and he could see that Bernie really cares about his sister, so the doctor has to decide if that’s going to be enough for him.

Meanwhile Dr. Halstead agreed to become a CI for CPD because his brother told him about Ray Burke and he realized he had to get involved.