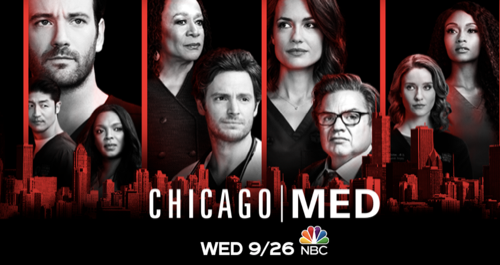 Tonight on NBC their medical drama Chicago Med airs with an all-new Tuesday, September 26, 2018, episode and we have your Chicago Med recap below. On tonight’s Chicago Med season 4 episode 1 called, “Be My Better Half,” as per the NBC synopsis,“In the Season 4 premiere, Goodwin finds herself quickly clashing with the new hospital COO while April questions whether or not Ethan’s sister, Emily, is using again. Dr. Charles deals with his past actions.”

Reese had missed out on her first day back. The other doctors hadn’t thought anything was amiss because Reese was experiencing family problems however Dr. Charles knew that Reese hadn’t come back because of him. He was the one that suspected her father was a serial killer and he had almost let the man die right in front of him because he hadn’t thought Robert Haywood deserved to live. The man was a monster. Dr. Charles thought if he hadn’t said anything or at least try to help that he would be rectifying the problem and so Reese walked in with her father was on the floor while Dr. Charles did nothing. The good doctor only felt compelled to help after Reese walked in and had seen for herself that he would have let her father died.

Afterward, it became unclear what happened yet Reese did do her best to assist the police. She brought them to her father’s storage locker and told them to have at it. So they did! The police were coming through the things and they thanked Reese for her assistance when it hadn’t really mattered to her. She wanted to do what was right and she hadn’t wanted to hear from Dr. Charles. The Chief of Psychiatry had gone with her to the storage locker and he tried to tell her what a good job she was doing, only she hadn’t wanted to hear from him. Dr. Charles was once a man she very much admired and since the incident with her father she couldn’t stand to be around him or his hypocrisy.

Dr. Charles was going to let her father die and seeing him every day would remind her of that, so Reese eventually returned to the hospital just long enough she said she’s leaving the hospital. She was going to continue her residency at Baylor and leave Med. Her leaving had been such a blow to Dr. Charles that he took his anger out on a medical student. The student was supposed to be monitored by Dr. Choi but Choi had been busy and so the medical student made a mistake. He was going to do the initial workup on a woman that was clearly agitated. She was talking about something that was going to get her and the medical student assumed it was a psychotic break that would interfere with his job. He ordered that the patient is sedated.

A med student was technically allowed to administer drugs much less to do so before she had even seen a psychiatrist. The problem could have been with the mind although there was also a very good chance that the problem could have been physical and that was manifesting in an unlikely way. Dr. Charles had found out what happened and he went off on the student. He called out the young man for the several mistakes he made and then demanded that Dr. Choi write him up. Choi, for his part, hadn’t known what was going on Charles and tried to put him behind him as he made his rounds. Choi had already lost a patient that day because the man had needed to be rushed to the OR and had died on the way there. And so Choi wasn’t the person to complain to.

Dr. Choi also had a problem with his sister. Emily was both a drug addict and a gambling addict. She needed some serious help and unfortunately she hadn’t wanted to go to rehab. She complained about feeling overwhelmed whenever rehab was mentioned and so Choi brought her back to his place to see if she’d more comfortable there but his girlfriend hadn’t liked that. April didn’t feel comfortable with bringing someone with so many problems back to their place and, so while Emily remained, April said she wouldn’t be returning home. She was very adamant about that and she hadn’t changed her mind even as she ran into Emily at Dr. Rhodes’s Goodbye Party. The two knew that they wouldn’t be on the same page as before and so they were going to drop it until Emily began feeling sick.

Emily was brought to the hospital after that and she was checked. Her symptoms were all over the place and so it was the blood test that told them what they needed to know. Emily wasn’t sick! She was actually pregnant and Dr. Choi flipped out once he heard. He thought Emily was again being irresponsible and asked her if she even knew who the father was however she did. She said it was Bernie and that they met at AA. She’s been going to AA for help and her boyfriend Bernie had been cleaned for six years. He was safe to date, except as a rule she shouldn’t even be anyone until she was clean for a year and so Choi saw this as his sister being a screw up again. He got so mad he walked off and it had been April that remained calm.

April later found Choi and she had been the one to talk him because he was beginning to say things like Emily couldn’t keep the baby. Emily was homeless two months ago and Choi figured she could run away at any moment or start using drugs again. He thought it would be best if his sister just gets rid of the baby and April told him that wasn’t the answer. She said a life was still a life and that they could be there for Emily. Emily then heard from April herself and she promised to be supportive just as Choi will be. So it doesn’t matter if Bernie doesn’t come around. She said Emily won’t be alive and that’s all the young woman needed. And elsewhere in the hospital, Dr. Charles had heard from another resident how he was the father Reese had always wanted and that made him see the light.

Dr. Charles later apologized to the medical student he shouldn’t because he realized he should have educated the young man on what should have done and not just yell at him. The doctor had felt so much better about apologizing that he knew there was one more person he needed to see. He went and visited Robert at the prison hospital. The man hadn’t been remorseful in the slightest and hadn’t cared that Reese was leaving Chicago. He blamed her for him being in prison and then came at Dr. Charles. He knew that the doctor would have let him die and so he tried to goad Charles into him yet Charles wouldn’t do it. He knew that killing him would be too easy and he chose to tell the other man that he’ll with speak Robert’s doctors about upping his medication.

And just when everyone had said their goodbyes to Dr. Rhodes, Goodwin and Dr. Bekker managed to force his hand. They got the board to authorize the funding they needed to create an OR right in the Emergency Room and such an expensive enterprise was going to need someone like Rhoades to run it. If he turned down the job then the new OR would never open and so Rhodes agreed to stay on. He never knew that Goodwin had to go behind the new COO’s back or that Bekker had gone to his father for some of the funding. All Rhodes knew was that he was needed and so he decided to stay.

And that meant he was staying around long enough for Halstead and Manning’s wedding because after the end of last season – she finally put that man out of his misery and said “yes.”