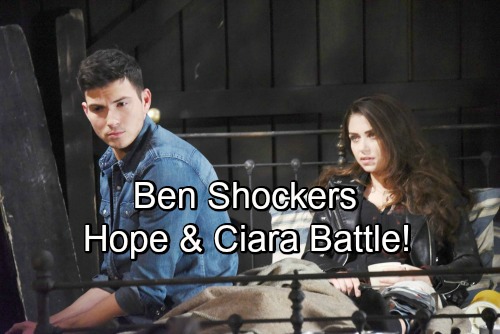 Days of Our Lives (DOOL) spoilers tease that Hope (Kristian Alfonso) will grow increasingly concerned about her daughter. The longer Ciara’s (Victoria Konefal) gone, the more frantic Hope will become. In the week ahead, Hope will rip into Tripp (Lucas Adams). She’ll blame him for hurting Ciara and sending her on a dangerous drive. Tripp’s the reason Ciara took off in such a distraught state.

Of course, Claire (Olivia Rose Keegan) played in a role in that as well. She’ll worry about what’ll happen if Ciara never turns up or worse, turns up dead. Like Hope, Claire’s fears will continue to be on the rise.

Fortunately, Days fans know Ciara’s alive and can recover from her injuries. Her life’s not in danger – at least not from her wounds. Ciara’s still got a supposedly reformed murderer looking out for her, so that remains an issue. Hope would be even more freaked out if she knew!

Ben will slowly win Ciara over as they open up about their pasts. During the week of June 18-22, they’ll both share difficult memories. Days of Our Lives spoilers say a deeper bond will start to form. Ciara will drop her guard and see the good in Ben. 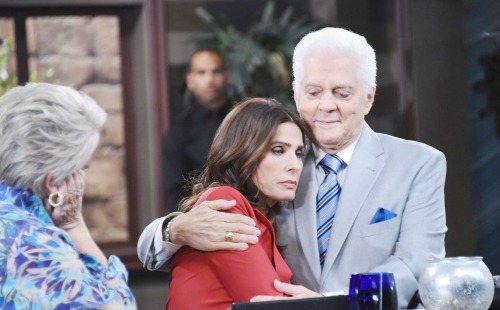 That’ll be important when the next round of chaos hits. Thanks to Ben, Ciara will get access to a burner phone on June 21. She’ll want to call her mom and let her know she’s OK. Days of Our Lives spoilers say Hope will be beyond relieved. She’ll wonder where Ciara’s at and that’s when a DOOL bomb will drop.

Ciara will suggest that she’s fine, but she has no intention of coming home. She’ll initially leave Ben out of her explanation. Ciara won’t plan on returning to Salem, but Hope will inevitably reunite with her at some point. Perhaps Ben will push Ciara into it sooner or later. Hope might even track Ciara down herself.

Once Ciara finally speaks with Hope in person, a fight should break out. Hope’s going to want answers, so Ciara will have to divulge the Ben story. Naturally, Hope will blow her top. She’ll rant about Ben taking Ciara somewhere secluded and refusing her hospital request. Hope will undoubtedly argue that Ben could’ve lost it and strangled Ciara in there.

However, Ciara will rush to Ben’s defense. If he’d left her on the pavement, a car could’ve taken that curve too hard and splattered her. Ben saved Ciara’s life, so she’ll think her mother should be grateful for that. Hope might manage to mumble out a “thank you” eventually, but she’ll fret about Ciara getting too close to him. She’ll sense that this is a terrible idea.

Many Days of Our Lives viewers are already rooting for “Cin.” There’s no doubt that they look great together and the drama of it all would be the best part! Are you on board with Ciara and Ben as a couple? We’ll give you updates as other Days news comes in. Stick with DOOL and don’t forget to check CDL often for the latest Days of Our Lives spoilers, updates and news.