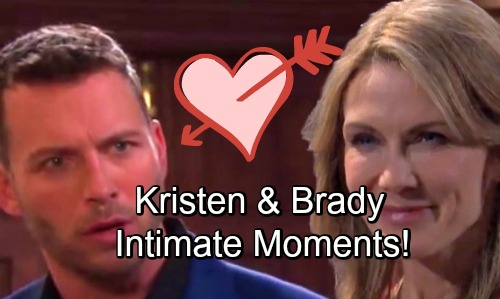 Days of Our Lives (DOOL) spoilers tease that Brady (Eric Martsolf) will be a real mess in the coming episodes. He just had a massive blowup with Eric (Greg Vaughan) and it didn’t end well. Brady forced Nicole (Arianne Zucker) to choose between her true love and her daughter, which Eric finds absolutely appalling. He can’t believe Brady would stop low enough to pull Holly into all this.

Brady cost Eric his soul mate, so their bond has been ripped apart. Eric even declared that they’re no longer brothers, so he means business! Unfortunately, Brady’s drama will continue thanks to Eve’s (Kassie DePaiva) deception. He won’t be able to get past her lies and dirty tricks.

Days of Our Lives spoilers say Brady will drift toward another woman soon enough. Kristen (Stacy Haiduk) always manages to draw Brady into her web. When Eileen Davidson was playing the role, Kristen and Brady’s chem was off the charts! Things are a bit different now that Haiduk has taken over. There’s not quite as much sizzle, but a Brady and Kristen pairing can still work for story purposes.

Next week, Days spoilers say Kristen will find a broken and bitter Brady. He’ll be feeling alone and vulnerable, so Kristen will happily exploit his pain. Kristen will hope this is her chance for a reunion. She can’t rest until she tries every strategy and makes Brady her man again.

Brady will be surprised when Kristen asks him to run away with her. She’ll insist that they can have a fresh start far away from Salem. Part of Brady may like the sound of that, but he’ll also understand that Kristen’s devious and out of control. She’s the reason Marlena (Deidre Hall) nearly died and Paul (Christopher Sean) is now paralyzed.

Brady will undoubtedly tell Kristen to buzz off, but she won’t listen. Days spoilers say Kristen will keep up her efforts to win Brady over. Since Brady’s not the best at avoiding temptation, it won’t be long until Kristen makes progress.

During the week of October 8-12, Kristen will score an intimate moment with Brady. Will they hit the sheets and consider what’s next? Will Brady actually contemplate a new life with Kristen? If Brady mulls over that dangerous road, he should come to his senses sooner or later. Kristen’s trouble and she always will be!

It looks like some good stuff’s brewing on the NBC soap. We’ll give you updates as other Days of Our Lives news comes in. Stay tuned to DOOL and don’t forget to check CDL often for the latest Days of Our Lives spoilers, updates and news.