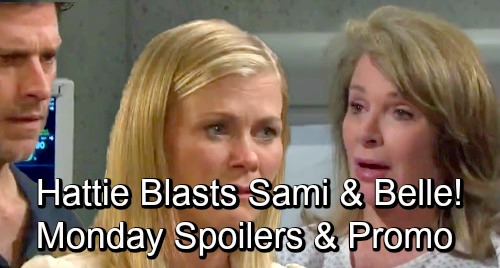 Days of Our Lives (DOOL) spoilers for Monday, September 17, tease that Marlena’s (Deidre Hall) loved ones will be ready for a tough blow. She was just taken off life support, so everyone’s gathered around to watch her slip away. The good news is the blonde in front of them will open her eyes and breathe on her own. The bad news is she won’t be Marlena!

DOOL fans know Marlena has a doppelganger named Hattie (Deidre Hall). She was sent to prison again after her last plot, but now John’s (Drake Hogestyn) cooked up a plot of his own. Days of Our Lives spoilers say the show will fill us in on how the switch happened. It looks like Roman (Josh Taylor) played a crucial role in breaking Hattie out of Statesville.

Then, Kayla (Mary Beth Evans) helped move Marlena to another level of the hospital. John even made sure they did a little remodeling so they wouldn’t get caught. When “Marlena” awakens, her family will be overjoyed. However, Days spoilers say Hattie will start ranting at some major players in this story. Sami (Alison Sweeney) and Belle (Martha Madison) will both get an earful from their “mom.”

John will try to keep Hattie under control, but his main goal will be keeping this swap a secret. He’ll want to give Marlena a real chance at recovery. Across town, Tripp (Lucas Adams) will comfort Claire (Olivia Rose Keegan) in her time of need. Days of Our Lives spoilers say Claire will use Marlena’s situation to her advantage. The girl’s got no shame!

Claire will ultimately lock lips with Tripp, but how will he feel about it? Could some love start to bloom? Tripp may do his best to focus on Ciara (Victoria Konefal) for now, but he stands no chance against Ben (Robert Scott Wilson). It’s clear that Ciara’s smitten with the reformed bad boy.

Of course, Ben and Ciara will face a slight hiccup thanks to Hope’s (Kristian Alfonso) evidence. Their trust will be broken when Ciara doubts Ben’s claims, but they can rebuild once the truth comes out. Ben isn’t guilty, so it’s just a matter of time until he’s off the hook.

DOOL viewers won’t want to miss Monday’s exciting episode. We’ll give you updates as other Days details emerge. Stay tuned to the NBC soap and don’t forget to check CDL often for the latest Days of Our Lives spoilers, updates and news.