BY hellodrdavis on November 18, 2018 | Comments: one comment
Related : Days of Our Lives, Soap Opera, Spoiler, Television 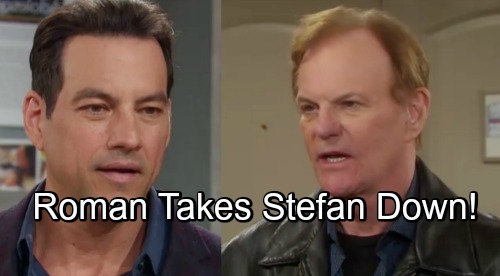 Days of Our Lives (DOOL) spoilers tease that Kayla (Mary Beth Evans) hasn’t forgotten about what happened to Steve (Stephen Nichols). Sure, she’s been busy with some pretty serious situations, like swapping out Hattie (Deidre Hall) for Marlena (Deidre Hall) at the hospital and dealing with Marlena’s living will. But she’s still lost without Steve and worries about him daily.

And she’s still holding a grudge against Stefan DiMera (Tyler Christopher). She can’t prove it, but she’s sure that Stefan was behind Steve’s arrest and espionage charges. Stefan would seemingly do anything to interfere in Steve and Kayla’s lives, and he’s really the only one who could have known that the bionic eye would get Steve into trouble with the authorities.

Look for Kayla to lay into Stefan in the near future. She’ll tell him exactly what she thinks of him and vow to bring him down. Of course, he’ll probably laugh that off, as he usually does, but Kayla’s not messing around. She’s got Roman (Josh Taylor) on her side, and he seems determined to get Stefan, too.

Roman is going to step up his quest to bring down Stefan, now that he’s not distracted by the Marlena/Hattie situation anymore. And he’ll have some help from Kate (Lauren Koslow). Kate will come along at the right time and tell Roman that she’s got the goods on Stefan, which will please Roman.

But what goods will she have on Stefan? She’d be able to expose Stefan for blackmailing her and forcing her to hand over Titan secrets, but that hardly seems like incriminating information that could put Stefan away. She could also spill that Stefan kidnapped Ted (Gilles Marini), but she probably won’t want to do that because she doesn’t want Ted to be found.

Whatever Kate will have on Stefan, she’ll hand over to Roman. Perhaps Roman can use it to his advantage around the time that Stefan is distracted and vulnerable. At some point Stefan is going to find out that Abigail’s (Marci Miller) baby is not his, and he’ll be at a weak point. Maybe then Roman can strike.

Are you looking forward to seeing Stefan get what’s coming to him? Stay tuned to DOOL and don’t forget to check CDL often for the latest Days of Our Lives spoilers, updates, and news.