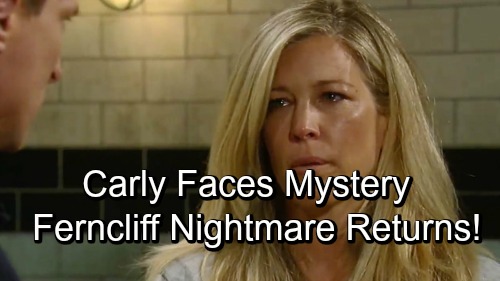 General Hospital (GH) spoilers tease that Carly (Laura Wright) will have another crisis to tackle. She’s been busy enough with Mike (Max Gail), Sonny (Maurice Benard) and Michael’s (Chad Duell) drama. Carly will have to handle Josslyn’s (Eden McCoy) upcoming chaos as well, but that’s not the crisis we’re talking about. This one involves evil Ryan (Jon Lindstrom) and his trapped twin!

Kevin’s (Jon Lindstrom) been telling everyone who will listen that he’s not his brother. Of course, no one at Ferncliff believes him. Ryan warned them all not to buy the patient’s claims. He recently ordered more sedatives, which will leave Kevin completely incapacitated. Ryan suggested it’d be better than letting him battle these delusions.

Kevin will be even less of a threat as a result, but what about Carly? She could be on the verge of a shocking discovery. Stories like this take some time to play out, but red flags have definitely been raised. Carly caught “Kevin” tapping Morse code out of habit, which left her taken aback. She recalled her neighbor at Ferncliff sending the same call for help.

Carly will undoubtedly keep that tidbit in the back of her mind. General Hospital spoilers say she may focus on it if Kevin keeps slipping up. He made another blunder by acting so indifferent about Carly’s therapy. When Carly agreed to keep attending sessions, Ryan wasn’t enthusiastic at all.

Nevertheless, Carly may follow through on her plan. As we mentioned, her family’s taking hit after hit right now. With so many Corinthos clan problems, it’s no wonder Carly needs help. General Hospital spoilers say another wave of Morgan (Bryan Craig) grief could make matters worse. Carly should definitely want what she believes is Dr. Collins’ guidance.

Kevin’s behavior in their next session could prove puzzling. Will Carly once again sense that something’s off? If she gets a big enough clue, Carly might do some real digging. GH fans know Laura’s (Genie Franis) going to need some assistance to figure all this out. Carly could be at least one of the people who comes through for her.