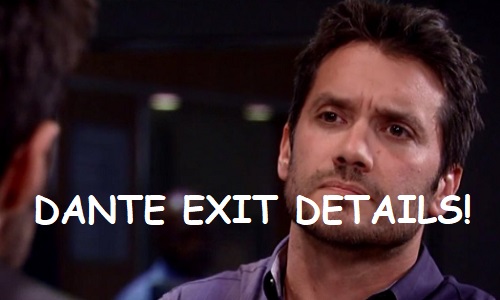 General Hospital (GH) spoilers tease that there’s some comings and goings news to pass along. For starters, let’s talk about Dominic Zamprogna’s last airdate. There’s no official word on that yet, but it’s definitely coming up soon.

Since the final spoilers involving Dante have already aired, many GH fans feared a recent episode was his last day. Some viewers worried that Dante just wouldn’t be brought up for a while. However, ABC Soaps in Depth confirmed that Zamprogna still has a few more scenes to go. General Hospital will indeed wrap things up for him one way or another.

There are also some new hints about Zamprogna’s last episode as Dante. His exit will be clear. GH won’t leave us dangling on what happened to him. SID’s Twitter account tweeted, “There’s a bit more. You’ll know. It won’t be, like, he goes to get coffee and we just don’t mention him.”

General Hospital could certainly recast Dante at some point, but it sounds like it won’t happen right now. Dante will likely be rushed off canvas for some reason. He might be called in on a case somewhere or something along those lines.

Maybe GH just needs some time to decide what’s next. They may already be on the hunt for someone to step up and be the new Dante. In other General Hospital news, Celesta DeAstis just returned as Francesca. She admitted that Dr. Bensch (James DePaiva) also sexually harassed her, so she’ll undoubtedly show up in more scenes soon.

Kiki (Haley Erin) could really use someone else in her corner, but can she convince Francesca to go on the record? That may be tough. Kiki’s already being treated differently around GH. Francesca may not be too keen on suffering the same treatment. Kiki won’t want to pressure Francesca, but she’ll hope to have somebody backing her up. She has to show Dr. Bensch’s pattern of despicable behavior.

General Hospital spoilers say there could be some on-set drama as well. Soap Opera Digest’s new blind item points to potential GH trouble. On one of the four soaps, vets are complaining about newbies eating up all the airtime. They’re also worried it’ll lead to a decline in the ratings this summer.

That’s not Days of Our Lives, which tapes nearly six months in advance. They’re not really focusing on newbies over there anyway. The Bold and the Beautiful has a couple of new teens this summer, but that’s to be expected. For the most part, they’re still sticking with their usual crew. The same goes for The Young and the Restless, which is tying in a lot of Y&R history right now.

General Hospital makes the most sense as the answer to this blind item, so it seems the cast may be fed up. Will that lead to any looming exits? Time will tell! We’ll give you updates as other GH details emerge. Stay tuned to the ABC soap and don’t forget to check CDL often for the latest General Hospital spoilers, updates and news.