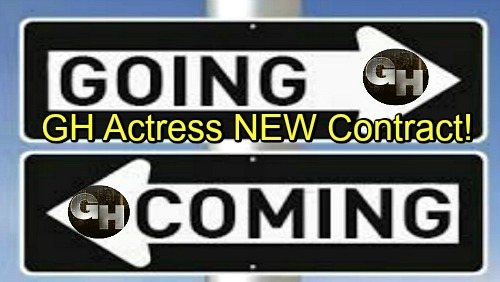 General Hospital (GH) spoilers tease that we’ve got some comings and goings news to pass along. For starters, let’s talk about an upcoming return. It’s been a while since GH fans have seen Valerie (Brytni Sarpy), but that’ll change soon. On social media, Sarpy revealed that she starts shooting again in a few weeks and will be back periodically. It should be fun to see what Valerie’s up to!

In other news, Eden McCoy (Josslyn) has been bumped up to a contract role. Cade McWatt recently made his first appearance as Cameron, so the show must have teen scene plans. Oscar (Garren Stitt) will round out this love triangle for some summer shockers. Since GH will be featuring Josslyn more, it’s good that McCoy signed on the dotted line. Now she’s locked in and ready to roll on extra drama.

Other General Hospital spoilers say a new doctor’s set to debut. Ferncliff needed an extra staff member, so GH went on the hunt for Dr. Lasaris. Casey Biggs has been cast as this mysterious doc, so it should be interesting to find out what he’s all about.

Dr. Lasaris could be connected to the unknown patient next to Carly (Laura Wright). The name “Lasaris” is reminiscent of Lazarus, a biblical figure who rose from the dead. Perhaps Dr. Lasaris is a bit of a miracle man. It’s possible someone GH killed off is back thanks to Dr. Lasaris’ top-secret work.

Kevin (Jon Lindstrom) still seems to be the frontrunner in this mystery. If he’s on the other side of that wall, his twin brother may have taken over his life. It wouldn’t be the first time Ryan (Jon Lindstrom) impersonated Kevin and wreaked havoc. Ryan was supposedly dead, so Dr. Lasaris could be responsible for this stunning comeback.

We should also mention an upcoming fan event. General Hospital’s holding a big one to commemorate the show’s 55th anniversary. Ted King (Lorenzo Alcazar) confirmed his involvement in a new issue of Soap Opera Digest. On Twitter, Thaao Penghlis (Victor Cassadine) also announced that he’d be there to celebrate.

Will Lorenzo and Victor ever return for GH arcs? You never know! Anything’s possible in the crazy town of Port Charles. That’s it for comings and goings. We’ll give you updates as other details emerge. Stay tuned to the ABC soap and don’t forget to check CDL often for the latest General Hospital spoilers, updates and news.