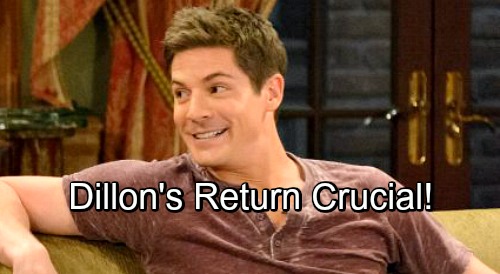 General Hospital (GH) spoilers tease that a talented hunk is consistently missed on the ABC soap. GH fans were stunned when Dillon (Robert Palmer Watkins) was abruptly written out, so they’ve been hoping for his return ever since. Thanks to the juicy drama that’s looming, there are three great reasons for Dillon to make a comeback. General Hospital may not deliver, but here’s why they should!

It was tough enough to learn Dillon was exiting, but how he left made it even tougher. General Hospital chose to trash a popular pairing. Dillon and Kiki (Hayley Erin) had plenty of fans, but GH’s destruction hit hard. They tried to make a long-distance relationship work, but it wasn’t long until another girl answered Dillon’s phone. The show turned him into a real jerk, so it’s time to fix that.

It’s seemingly now or never due to Erin’s apparent departure. Since it looks like Kiki may be killed off, it’d be nice if Dillon could pop in for some scenes before her potential death. If not, Dillon should at least be at the funeral. Kiki was a huge part of his life and he genuinely cared about her. They broke up, but it shouldn’t erase the connection they once shared.

There’s another good reason for Dillon to return and it’s a simple one. We simply don’t have enough Quartermaines on canvas. Since this family should be a major part of GH, that’s a problem. General Hospital should let Dillon get back in the mix and lead the next generation of the Quartermaine clan. Now that the character’s rested for a bit, there could be some exciting story opportunities.

There’s been a lot of casting news in the soap world lately, but it mostly revolves around newbies. It’s nice to breathe new life into shows sometimes, but other times you just want some fan favorites! GH has lost some crucial characters this year like Nathan (Ryan Paevey) and Dante (Dominic Zamprogna). (The latter will appear in Monday’s new GH episode, November 12, , but it’s a one-time deal.)

Nelle (Chloe Lanier) was a love her or hate her kind of gal, but she was a difficult loss, too. She carried the drama for quite a while. Now that it appears Kiki’s a goner, it’d be nice to hear about a comeback. Dillon’s return would be welcomed by many GH viewers.