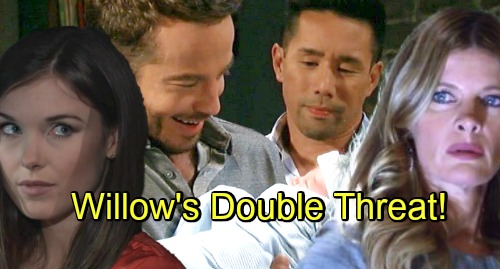 General Hospital (GH) spoilers tease that Nina (Michelle Stafford) has some serious shockers in her future. She’ll face a few smaller ones that ultimately lead to two giant GH bombshells. Some crazy revelations will change Nina’s world in a big way!

The mayhem will start when Sasha (Sofia Mattsson) faces some startling accusations. After Kiki (Hayley Erin) finds Sasha in bed with Griffin (Matt Cohen) on Tuesday, a “sister” war will break out. Kiki already suspected that Sasha was a bit too interested in Griffin. Her suspicions were confirmed when Sasha made an admission later.

Thanks to Ava (Maura West), Sasha thought Griffin and Kiki were simply friends with benefits. She chewed Ava out for misleading her, but more mischief is afoot. Sasha will undoubtedly assure Kiki that nothing happened – at least nothing that she can remember. She fell asleep after eating the soup Ava drugged, so the details may be hazy.

When Nina gets updates, she’ll hit the roof. We already saw how fiercely Nina defended Charlotte (Scarlett Fernandez) to Willow (Katelyn MacMullen). Nina will surely step up for Sasha, too. She’ll launch an attack on Ava for stirring the pot, especially since Sasha might be tempted to leave town.

Of course, there are more shakeups to come for Nina. She’ll inevitably find out Sasha isn’t her real daughter, so Valentin’s (James Patrick Stuart) lies will hit hard. That brings us to the first of the two biggest bombshells we mentioned. If Sasha isn’t Nina’s biological child, who is? There are a couple of great options on canvas at the moment.

Nina is certainly staying in Ava’s orbit and all the Sasha drama could lead to conflict with Kiki as well. However, it looks like Hayley Erin will be exiting the role of Kiki pretty soon. Word has it Kiki may be killed off, so it seems cruel to snatch Nina’s daughter away permanently. That’s especially true since they wouldn’t have a chance to bond as mom and kid.

Perhaps GH shifted gears in preparation for a big reveal. Nina made a terrible first impression on Willow. The whole scene seemed like a setup for some mother-daughter clashing later. If Willow is exposed as Nina’s child down the road, they’ll have some work to do in terms of connecting.

Willow also had a very negative reaction to Nina’s question about children. When asked if she had any of her own, Willow seemed distraught and defensive. We also know she’s been going to that bereavement group with Michael (Chad Duell). General Hospital has all the puzzle pieces to make Willow the mysterious birth mother. She may be the one who gave Wiley up for adoption.

If that’s the case, Julian (William deVry) probably had to share the dead baby swap news to get Willow off Brad’s (Parry Shen) back. Could the show be gearing up for double trouble? Nina eavesdropped on a suspicious conversation between Julian and Brad once. She could put it all together and play a role in how the truth about Jonah comes out.

In other words, Nina may find out Willow is her real daughter AND the birth mom to a baby that’s no longer living. If Willow lets something slip about Brad and Lucas (Ryan Carnes), that could put Nina hot on the trail! Michael (Chad Duell) would have to be brought in the loop eventually.