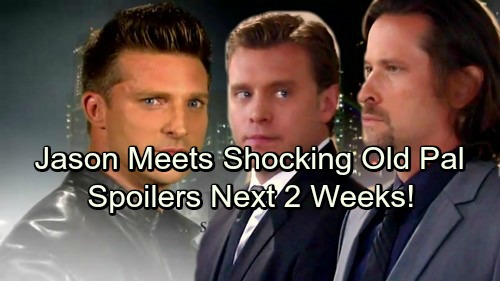 General Hospital (GH) spoilers for the next two weeks tease that secrets and setbacks will shake things up. The week of January 15-19 will bring some frustrating moments for Anna (Finola Hughes). She was ready to move forward with Finn (Michael Easton), but he’s dragging his feet. It looks like Finn will continue to resist their romance, so Anna will just have to deal with that for now.

Meanwhile, Kiki (Haley Erin) will start to worry. She’ll be nervous about Ava’s (Maura Wright) procedure, but Griffin (Matt Cohen) will offer reassurance. He’ll urge Kiki to trust the doctor and expect a positive outcome. Griffin wouldn’t let Ava go through with this is if didn’t have complete confidence in the doc’s abilities.

Ava will be haunted by the past as the procedure’s taking place. She’ll have to face the sorrow she’s brought to Port Charles. While under anesthesia, General Hospital spoilers say Ava could have a bit of a breakthrough. She won’t exactly be redeemed, but she’ll understand that she needs to stay on the right path. We’ll see how long she sticks to that goal!

Elsewhere, Dr. Obrecht (Kathleen Gati) will struggle with total desperation. Her worst fears are coming true. Now that the interview’s out there, Faison (Anders Hove) is bound to find out Nathan is his son. GH spoilers state that Dr. O will decide to take action. She’ll hope she can stop the danger ahead, but her plan seems destined for failure since it has been confirmed that Nathan (Ryan Paevey) is exiting GH soon.

The week of January 22-26 will deliver a good dose of confidence for Ned (Wally Kurth). He’ll believe he’s going to crush Laura (Genie Francis) in the upcoming mayoral election. However, Ned really shouldn’t get too cocky. Laura will soon prove she’s a force to be reckoned with.

Other General Hospital spoilers say Anna won’t be helpful. Perhaps Jason (Steve Burton) and Sonny (Maurice Benard) will turn to her for more traitor help. Some GH buzz suggests Anna could be the mother of the traitor, Peter (Wes Ramsey). Anna won’t want the guys to get any closer to the truth, so something must be up.

Nevertheless, Sonny and Jason will eventually make progress. They’ll eventually end up in a situation where they have to come to someone’s rescue. Lulu (Emme Rylan) is an option since she’ll be in a tight spot, but there are other PC residents who might need help as well.

Jason will also get a visit from a familiar face. He’ll welcome the sight of his old pal, so who’s it going to be? General Hospital spoilers hint that Jason will get some valuable support thanks to this encounter.

Across town, Kiki will experience a horrible betrayal. Uh-oh. Has Dillon (Robert Palmer Watkins) been cheating? It certainly sounds like it! We’ll give you updates as other GH news comes in. Stick with the ABC soap and don’t forget to check CDL often for the latest General Hospital spoilers, updates and news.