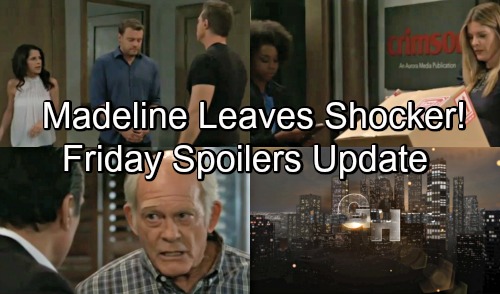 General Hospital (GH) spoilers for Friday, September 7, tease that Nina (Michelle Stafford) will ponder an intriguing package. After it shows up at Crimson, Maxie (Kristen Storms) will grow curious. She’ll urge Nina to divulge who it’s from, but the answer should surprise her.

Nina will admit her mother’s lawyers sent it over. Madeline (Donna Mills) took a big secret to the grave – if you believe she’s actually dead. She knew Nina never really had that miscarriage, so it’s possible some legal document or memento will point to the truth. General Hospital spoilers say Nina will take a look in the box and see what she can find out.

Meanwhile, Kristina (Lexi Ainsworth) and Julian (William deVry) will bicker about her career goals. She wants to work at Charlie’s Pub, but he’ll insist that Sonny (Maurice Benard) isn’t going to it. Julian will try to wiggle out of hiring Kristina, but she’ll make an awfully strong case for why he should. Kristina has a habit of getting her way, so maybe she’ll get Julian on board in the end.

Elsewhere, GH spoilers say Sonny will tackle a different problem. Mike (Max Gail) will seem agitated about the body and gun chaos. He’ll bring up the moved evidence and suggest that he should clean the mess up for good.

Sonny won’t know how Mike intends to do that, but he probably won’t get any reasonable schemes from his fading father. Mike just needs to keep his mouth shut, so Sonny will do his best to calm him down. That could become more difficult as Mike’s mental state deteriorates.

Over with Oscar (Garren Stitt), he’ll turn on the charm and rev up the romance. Josslyn (Eden McCoy) and Oscar will get their love story back on track with some sweet scenes. They’ll hope to get to know each other even better, but that plan could be in jeopardy thanks to Oscar’s inoperable brain tumor.

Across town, Sam (Kelly Monaco) will have a chat with Jason (Steve Burton) and Drew (Billy Miller). Their topic will be Oscar and his recent collapse. Sam will seem concerned as she asks about Oscar’s condition. She’ll try to learn more about the situation, but Drew may be reluctant to share much.

Finally, Curtis (Donnell Turner) will have a chance to confront Carter Buckley. Jordan (Vinessa Antoine) will be on hand to help out, too. Carter was the attorney Madeline used for the adoption of Nina’s child. Curtis will try to pry whatever he can out of Carter, who’s got nothing to lose since he’s near death.