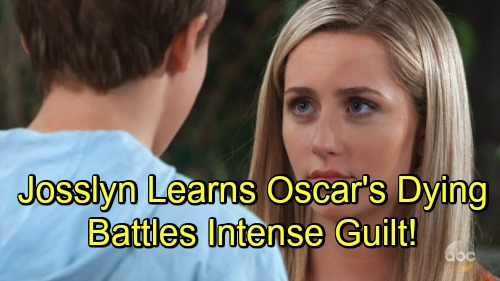 General Hospital spoilers tease that Josslyn (Eden McCoy) will get a major shock when she finds out that Oscar (Garren Stitt) is in the hospital. Joss and Oscar had planned a one-year anniversary date in the park, but when Oscar didn’t show up, Joss started to doubt herself. She thought maybe Oscar had decided not to show because of her past behavior, which was a bit messed up when her mom was in Ferncliff.

Of course, jealous Cameron (William Lipton) was right there to hear all of Joss’s worries and fears about why Oscar didn’t show. He even planted the seed of doubt in Joss’s head that maybe Oscar wasn’t the right guy for her and didn’t understand her in the way a loyal boyfriend should. It all culminated in a big smooch between Cameron and Joss – something Joss certainly hadn’t planned on.

Ordinarily, a kiss in the park with a guy who’s not one’s boyfriend would be cause itself for considerable guilt, but Joss is probably going to feel way worse about the kiss when she learns exactly why Oscar was a no-show to their anniversary date. 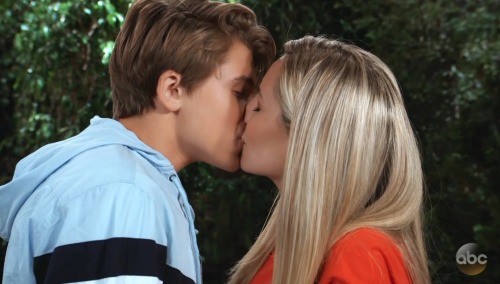 It turns out that Oscar collapsed due to a seizure caused by a very serious illness, and Oscar is dying. Of course, nobody but Kim (Tamara Braun) seems to have known this terrible fact, and it appears that even Oscar doesn’t yet know his fate. But at some point, the truth will come out and everyone will have to face the awful reality that Oscar is dying.

For Joss (and for Cameron, too), Oscar’s condition will come as a big shock. Kids that young just don’t think about the possibility of their peers dying, especially from a disease like cancer, which it looks like Oscar has. Joss will probably be terrified about the prospect of losing Oscar, especially when they are supposed to have their whole lives ahead of them.

And Joss is likely going to struggle with the guilt of doubting Oscar and being peeved at him for being a no-show at their anniversary date. And she’ll probably really feel bad for kissing Cameron. Of course, Cameron kind of pulled her into the kiss all of a sudden, so she may not have meant for it to happen, but she’ll sill probably feel intense guilt over it.

Do you think that Joss will tell Oscar what happened with Cameron? Stay tuned to the ABC soap and don’t forget to check CDL often for the latest General Hospital spoilers, updates, and news.