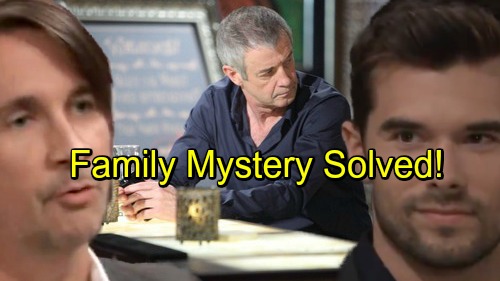 General Hospital (GH) spoilers tease that fans will learn more about Finn (Michael Easton) and Chase’s (Josh Swickard) background. There are some buried secrets within their family, but GH hasn’t filled viewers in on all the facts just yet. Let’s consider what we know so far and look ahead to what will be revealed down the road.

After Finn’s mother died, his father moved on quite quickly. Too quickly for Finn’s taste! He turned against his dad, who remarried and had another son with his new wife. That’s where Chase came in the picture. Finn always felt like bonding with Chase would mean letting their father in his life. He kept Chase at a distance and didn’t treat him with the respect he deserved.

Fortunately, positive developments are brewing. Finn will finally get to know Chase and learn to care about him like never before. General Hospital spoilers say their connection will grow stronger in the coming months. They’ll learn more about each other and hopefully build a bond that’s meant to last.

Of course, that doesn’t mean there won’t be some hiccups along the way. GH fans can expect a family mystery to take center stage. It’s clear that General Hospital isn’t giving us the whole story. Finn’s estrangement from his father must be about more than just getting married again too fast. That’s not a good enough reason to turn against your own dad for decades.

It’s possible Gregory (James Read) cheated on Finn’s mom before her death. That would explain Finn’s rage about them getting together right away. There’s even a chance that Gregory stole Finn’s girlfriend, which could lead to a shocking twist. It’d be interesting if Finn turned out to be Chase’s father instead of his half-brother.

However, GH could have some other bombshell in mind. It’ll have to be big since they’ve kept us waiting this long! General Hospital spoilers say Chase and Finn will go through an intriguing ordeal together. After an incident involving Gregory, they’ll come together and somehow provide more clues about the past.

Are you excited to see what’s in store for these two? Can Finn and Chase’s new bond withstand the storm ahead? We’ll give you updates as other GH news comes in. Stay tuned to the ABC soap and don’t forget to check CDL often for the latest General Hospital spoilers, updates and news.