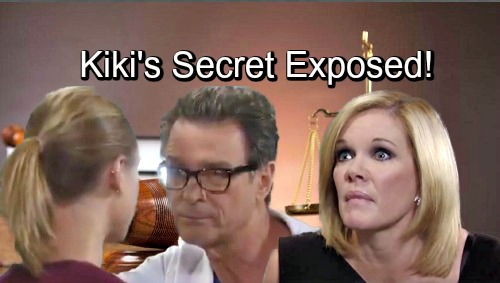 General Hospital (GH) spoilers tease that Kiki’s (Haley Erin) hookup with Griffin (Matt Cohen) will inevitably come back to haunt her. Their night of passion clearly wasn’t a great idea, but keeping it a secret from Alexis (Nancy Lee Grahn) is an even worse one. Griffin pushed Kiki to come clean, but she doesn’t see the need. Kiki feels like they can keep this news contained, but she’s missing a crucial fact.

Scott (Kin Shriner) knows the truth now and that changes everything. He’s Dr. Bensch’s (James DePaiva) lawyer, so he’ll have a hard time staying silent. Dr. Bensch expects Scott to use the picture he took in court and he may have to go along with that plan. Despite Ava’s (Maura West) protests, Scott will worry that Dr. Bensch may force him to present the evidence.

Of course, Scott’s main concern will be keeping the one-night stand tidbit off the table. Dr. Bensch doesn’t know about that yet – or if he does, he hasn’t disclosed it. Nevertheless, this photo could certainly open up that line of questioning.

Since Griffin tends to be Dudley Do-Right, Scott knows there’s a good chance he’ll crack on the stand. He’ll inevitably be called as a witness thanks to this pic, so the stakes are higher than ever. Even Kiki could slip up during her testimony. She’s created some major risks by suing Dr. Bensch with a secret like this hanging over her.

If this makes it to trial, General Hospital spoilers say the truth will most likely come out in courtroom. There’s just no way GH can pass up that kind of drama! Alexis is sure to be caught off guard by the revelation. She should be furious that Kiki chose to keep something so huge from her. Alexis already feels like this is an uphill battle, but a win may be impossible after this devastating blow.

General Hospital spoilers say the fallout should be brutal. Ava will certainly blow her top and dump Griffin on the spot. You can bet Kiki will face Ava’s wrath as well. As for the case, Dr. Bensch may get off scot-free – at least in the eyes of the law. However, Franco (Roger Howarth) seems determined to bring this guy down. He may resort to drastic measures if things don’t work out in Kiki’s favor.

Has Kiki killed any chance of winning her case? Will Dr. Bensch suffer a fate worse than a guilty verdict? We’ll give you updates as other GH details emerge. Stay tuned to the ABC soap and don’t forget to check CDL often for the latest General Hospital spoilers, updates and news.