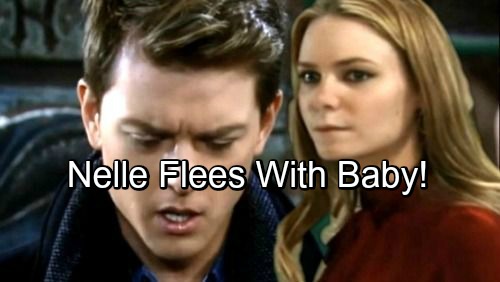 General Hospital (GH) spoilers tease that Michael (Chad Duell) may have some regrets soon. He agreed to go along with Chase’s (Josh Swickard) idea, but there are obviously huge risks involved. Jordan (Vinessa Antoine) is concerned about Michael’s safety, so she warned Chase to be careful. There’s no room for error when you’re dealing with a pretend demise and a dangerous “baby mama.”

We can’t leave out the fact that this is awfully cruel to Michael’s loved ones. He intends to fake his death without telling them, so that’s bound to be brutal. Nevertheless, Michael believes he has to do his for two people he cares about. He wants to save Carly (Laura Wright) from her Ferncliff fate and protect his unborn child. Those are Michael’s only goals right now.

Carly will undoubtedly get out of her predicament one way or another. GH isn’t going to leave her locked in there forever. That means half of Michael’s mission will be accomplished. Whether he’s the reason for Carly’s freedom or not, at least she’ll be back home where she belongs.

However, the baby side of all this may not go as expected. Michael’s efforts to protect his little one could backfire big time. Let’s consider how this might play out. After Michael fakes his death and Nelle falls under suspicion, she’ll inevitably panic. If Nelle hasn’t had the baby by then, her freak-out will surely spark labor.

If Nelle’s bundle of joy is already home with her, that might even raise the stakes. Nelle could somehow figure out that she’s been duped. She could feel the walls closing in and realize she could be locked up for her crimes.

General Hospital spoilers hint that Chase and Nelle will have a heated argument right before her exit. Perhaps she’ll confront him about deceiving her and get a warning in return. Chase may gloat that Nelle’s going down. He may even try to make an arrest, but Nelle could easily give him the slip.

There’s also been some General Hospital buzz about Michael not ending up with a kid. Most GH fans assumed Brad (Parry Shen) and Lucas (Ryan Carnes) might get the baby, but what if that’s not the case? No one would be surprised if Nelle simply disappeared into the night with her child. She might think of it as revenge for Michael’s deception.

This would be a great way to set up a return arc. Crazy Nelle could make a shocking comeback someday with an older child. Will Michael’s scheme cost him? Will he drive Nelle to flee with the baby in tow? We’ll give you updates as other GH news comes in. Stay tuned to the ABC soap and don’t forget to check CDL often for the latest General Hospital spoilers, updates and news.