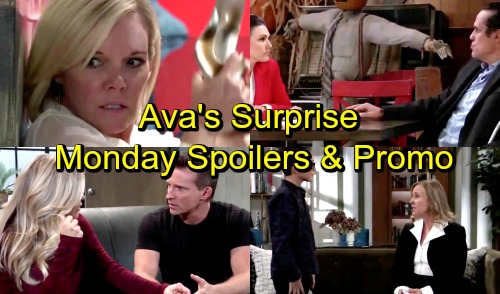 General Hospital (GH) spoilers for Monday, November 5, tease that Jordan (Briana Nicole Henry) will get some unpleasant news. Will it be about her upcoming nuptials? Curtis (Donnell Turner) and Jordan have been facing snags along the way, but they’re trying to hang in there. If there’s another hurdle, they’ll undoubtedly put their heads together and move past it.

Curtis will also offer assistance on Monday’s new GH episode, November 5. He may think he can dig around and possibly pitch in on the murder investigation. Thanks to Ryan’s (Jon Lindstrom) deviousness, the PCPD has been left with a real mess. If there’s anything Curtis can do, he’ll want Jordan to let him know.

Carly (Laura Wright) and Ava (Maura West) seem to be emerging as suspects, but Ryan wouldn’t frame the new lady in his life. There’s a good chance the blonde hair planted in Mary Pat’s (Patricia Bethune) hand will be Carly’s, as CDL previously reported. However, it could be a while before the lab results come in.

For now, Carly will be traumatized over all her Ferncliff issues. She’ll lean on Jason (Steve Burton) for support and talk about the mystery she left behind. As painful as it is, Carly will be determined to crack the case of the mystery patient.

Other General Hospital spoilers say Laura (Genie Francis) will battle doubts. “Kevin” just told her he wanted to separate, so Laura will obviously be in pain. She’ll fill Spencer (Nicholas Bechtel) in on this difficult split and reconsider her campaign plans.

Laura won’t think this is the right moment to go into public service. Spencer will understand that Laura’s going through a lot, but he probably won’t want her to give up. He may remind his grandmother of all the people she can help. At least running for mayor would distract Laura from her sorrow.

At the gallery, Ava will still be on edge over all the murder mayhem. As footsteps come around the corner, Ava will prepare to attack. She’ll lift something above her head and get ready to strike the intruder. It seems likely that it’ll actually be fake Dr. Collins. Ryan may drop by to see how Ava’s holding up after the terror she endured. He can feign innocence and shower Ava with the attention she craves.

GH fans can also expect a meeting between Margaux (Elizabeth Hendrickson) and Sonny (Maurice Benard). Perhaps Sonny will hint at the new evidence regarding Jeanette (Ely Pouget) and suggest that Margaux should back off. Of course, Margaux will want to get some answers for herself. Sonny will snarl that Margaux has no idea what she’ll find, but the DA will take her chances.

It sounds like some exciting scenes are coming up. We’ll give you updates as other General Hospital details emerge. Stay tuned to ABC’s GH and don’t forget to check CDL often for the latest General Hospital spoilers, updates and news.