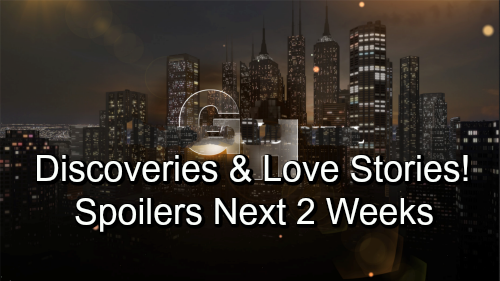 General Hospital (GH) spoilers for the next two weeks tease that some heated confrontations are on the way. The week of September 24-28 will bring another disagreement for Drew (Billy Miller) and Kim (Tamara Braun). Since he’s determined to reveal the tumor diagnosis to Oscar (Garren Stitt), Kim may lash out and try to prevent it. She’s clearly struggling to accept what’s in front of her.

Of course, Cameron (William Lipton) already ran his mouth to Oscar and set some trouble in motion. General Hospital spoilers say Oscar will want to hide the truth from Josslyn (Eden McCoy) while he figures this out. Based on his parents’ weird behavior lately, Oscar will suspect Cam’s right about the cancer.

Later, Kim and Drew will stay up all night as Oscar seeks a new perspective. Maybe they’ll spend some time as a family and try to help Oscar cope. Elsewhere, Lulu (Emme Rylan) and Maxie (Kirsten Storms) will be at odds. After Peter (Wes Ramsey) pushes Maxie away again, she’ll grow suspicious of Lulu. Maxie will soon figure out that Lulu’s the reason Peter’s trying to keep his distance.

While Maxie objects to Lulu’s interference, Lucy (Lynn Herring) will refuse to accept a rejection. Perhaps she’ll urge Kevin (Jon Lindstrom) to get on board with an invitation of some sort. However, it won’t be the real Kevin! GH fans know Ryan’s (Jon Lindstrom) still running amok, so he may be sorry he ever got in touch with Lucy. She could become a thorn in his side.

The week of October 1-5 will deliver some wild moments for Oscar. It appears he’ll exhibit some reckless behavior and leave Kim reeling. Josslyn (Eden McCoy) will likely learn the truth around then as well. General Hospital spoilers say Carly (Laura Wright) will comfort her daughter as this crisis hits. She’ll just wish she could take Josslyn’s pain away.

Across town, Kiki (Hayley Erin) will step up her game. She’ll be ready for a big step, so it sounds like she’ll hope to break down the friendship barrier with Griffin (Matt Cohen). Over with Kristina (Lexie Ainsworth), she’ll come through for someone in need. GH may want some more Kristina and Valerie (Brytni Sarpy) bonding scenes. If so, Valerie may be the one Kristina helps out.

Other General Hospital spoilers say Nina (Michelle Stafford) will face a shocker and ponder her next move. She’ll just want to do what’s right, but she won’t be sure what that is. Will Nina suspect that Kiki’s her daughter? GH has provided clues that point toward that development, so it’s a possibility to consider.

Maxie will quickly pick up on Nina’s strange vibe. She’ll demand some answers, but how much will Nina reveal? We’ll give you updates as other GH news comes in. Stay tuned to the ABC soap and don’t forget to check CDL often for the latest General Hospital spoilers, updates and news.