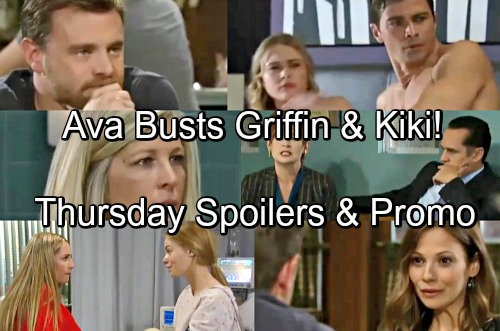 General Hospital (GH) spoilers for Thursday, May 24, tease that Drew (Billy Miller) will share his plan with Kim (Tamara Braun). He intends to undergo a risky memory procedure, but Kim will urge Drew to reconsider. Andre (Anthony Montgomery) isn’t sure Drew can even survive this, so he really needs to be careful.

Drew has already missed out on plenty of years with Oscar (Garren Stitt). His son would be devastated if he died. Drew also needs to stick around and raise Scout. He should think about how Jake (Hudson West) and Danny (T.K. Weaver) would feel, too. Kim will remind Drew of what’s at stake and hope for a change of heart. She’ll want to make sure he’s there to watch the kids grow up.

Other General Hospital spoilers say Julian (William deVry) will stop by Alexis’ (Nancy Lee Grahn) place. He’ll offer a bouquet of flowers along with his sympathy. Thanks to all her Finn (Michael Easton) heartbreak, Alexis is pretty vulnerable right now. She’ll let herself be pulled into a steamy kiss with Julian, but she’ll quickly battle regrets.

Griffin (Matt Cohen) will also have a remorseful morning. He got drunk with Kiki (Haley Erin) and they ended up hitting the sheets. When Ava (Maura West) starts banging on the door, Kiki and Griffin will have to think fast. Since they don’t want to get caught, there are only two options. Griffin can turn Ava away or Kiki can dash in the bathroom to hide.

Whatever the case, Griffin won’t be confessing anytime soon. The former priest will keep his hot night with Kiki a secret. At GH, Nelle (Chloe Lanier) will put a smile on Josslyn’s (Eden McCoy) face. She’ll admit that the baby drama had a silver lining. Nelle will think this whole ordeal has brought her closer to Michael (Chad Duell).

Josslyn will suggest that’s fantastic news. She’s truly rooting for Michael and Nelle to be a family with their little one. At the police station, Michael will sport a serious look as he confronts Carly (Laura Wright). He’ll insist that he wants to hear her side of the story. Michael loves his mom and doesn’t want to think the worst of her. However, he can’t deny that Carly looks awfully guilty.

Carly will deny Nelle’s accusations and urge Michael to accept that his ex is a liar. She’ll hate seeing the doubt in her son’s eyes. Meanwhile, Diane (Carolyn Hennesy) will share her fears with Sonny (Maurice Benard). She’ll think Carly’s far more out of control than she’s willing to admit.