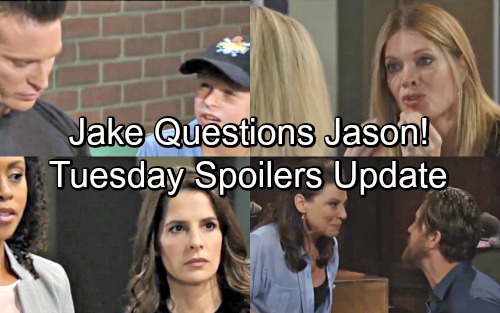 General Hospital (GH) spoilers update for Tuesday, July 17, tease that Peter (Wes Ramsey) will try to guilt-trip his captor. Liesl Obrecht (Kathleen Gati) isn’t usually a guilt-ridden kind of gal, but Peter might make a hint of progress. Dr. O will at least face a flood of emotions, but there’s no guarantee that’ll save Peter. When faced with the choice of revenge or compassion, Liesl almost always chooses revenge.

Fortunately, several GH characters are hot on the trail. Valentin (James Patrick Stuart) definitely thinks this whole West Nine virus thing seems odd. The quarantine hasn’t been on the news or anything, so Valentin must suspect some deception. He’ll bother Finn (Michael Easton) by fishing for details and put it all together soon enough.

Valentin will figure out what Nina’s (Michelle Stafford) been hiding, but what will he decide to do next? Will Valentin confront Nina or plot a sneaky rescue first? Regardless, Valentin needs to be careful. One wrong move could tip Liesl off and spoil any plans.

In the meantime, Nina will be at the end of her rope. During a conversation with Maxie (Kirsten Storms), Nina will rant about everything she’s been through. She’ll feel like she’s losing control, so she’ll be desperate to regain some sense of normalcy.

Maxie will understand Nina’s frustration, but she’ll think there’s more to the story. Nina will probably hightail it out of there if Maxie gets too curious, but that won’t stop Maxie from digging around. Across town, Margaux (Elizabeth Hendrickson) will also be quite inquisitive. It’s her job to be nosy, so she’ll push Jordan (Vinessa Antoine) and Sam (Kelly Monaco) to spill everything.

Carly’s (Laura Wright) escape will still be a hot topic at the police station. Margaux will wonder just how involved Jason (Steve Burton) and Sonny (Maurice Benard) were. She knows they don’t exactly play by the rules, so she’ll naturally assume the worst. In fact, Margaux wouldn’t be surprised if they orchestrated Carly’s getaway.

Of course, General Hospital fans know Sonny and Jason are innocent. Sam may pipe up that they were as shocked as anyone when Carly derailed the wedding. However, that won’t stop the consequences for Carly. Margaux will set out to make Carly’s Ferncliff stint more miserable and much longer.

Elsewhere, Jake (Hudson West) will prompt some soul-searching for his dad. As he sits with Jason, he’ll ask if Sam’s worth going after. Jason will likely confirm that she is, so Jake may wonder what the holdup is. Patience is a good thing, but you can only wait around for so long! Perhaps Jason needs to take the bull by the horns here.

Over with Drew (Billy Miller), he’ll get guidance from Curtis (Donnell Turner). Drew’s been down in the dumps lately, but Curtis will believe he has the solution. There are plenty of fish in the sea, so Curtis will think Drew should throw out a line. He’ll suggest that his buddy needs to find someone new and see where it leads.

At GH, Liz (Rebecca Herbst) and Franco (Roger Howarth) will have an important discussion. He’ll want to disclose something, so he’ll take Liz aside and blab. This could be about Obrecht’s sneakiness or perhaps Kiki’s (Haley Erin) case against Dr. Bensch (James DePaiva). Either way, Liz will give Franco some solid advice. She’ll believe he needs to do what’s right, so Franco will keep that in mind.