The Bold and the Beautiful Spoilers: Annika Noelle Reveals Hope’s Sneaky Plans for Liam – Steffy’s Rival Won’t Back Down

BY Heather Hughes on May 4, 2018 | Comments: one comment
Related : Soap Opera, Spoiler, Television, The Bold and the Beautiful 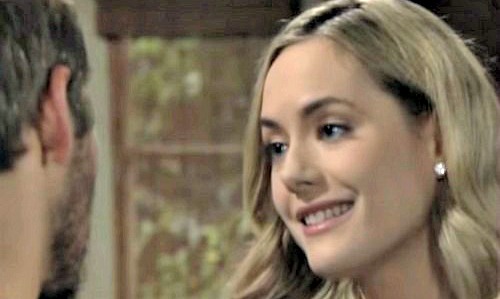 The Bold and the Beautiful (B&B) spoilers reveal that Hope’s (Annika Noelle) victory will bring plenty of drama. She’s the current winner of the Liam (Scott Clifton) love triangle, but it wasn’t a fair fight! Bill’s (Don Diamont) deception is to blame for Steffy (Jacqueline MacInnes Wood) and Liam’s destroyed reunion. His plot’s pushing “Lope” together, so Hope’s win may not stick in the end.

However, Hope will be ecstatic for now. The Young and the Restless spoilers say Liam’s proposal will leave her over the moon. Hope won’t care that she’s Liam’s second choice. As long as Hope gets a future with him, she’ll be perfectly happy. Steffy may keep fighting with Ridge’s (Thorsten Kaye) help, but you can bet that Hope will fight right back.

Of course, this feisty version of Hope is much different from the one who supported “Steam.” Somewhere along the way, Hope switched sides and decided to support herself. In an interview with CBS Soaps in Depth, Annika Noelle talked about Hope’s sneaky side and what it means for this Liam battle.

“She knows she should respect their marriage, but there’s that little part of her that can’t help herself,” Noelle said. “I think she’s under that magical ‘Liam’ spell that he puts every lady under!” B&B fans know exactly what she’s talking about. The Bold and the Beautiful tends to be all about Liam on any given day, so sometimes it feels like every female character’s drawn to him.

Noelle admitted that she’s heard the “Steam” lovers loud and clear. Liam and Steffy have a passionate fan base, so Noelle realizes she came in as an underdog. She noted that “Team Steffy is out in full force,” but quickly added that “it’s to be expected.”

Fortunately, Noelle suggested that she’s also starting to hear from some “Lope” fans. There aren’t as many yet, but there’s time for growth. As for her character’s hypocritical turn, Noelle doesn’t seem to mind. “No one is perfect,” Noelle said. “What makes characters interesting is their flaws; it’s what makes them real.”

Noelle also indicated that Hope has trouble executing her good intentions. She wants the best for everybody, but it’s not easy for her to make it happen. That’s especially true when Hope’s dreams clash with the dreams of other characters!