The Bold and the Beautiful Spoilers: Who’s 2017’s Bigger Villain – B&B Bill Spencer or The Young and the Restless Victor Newman? 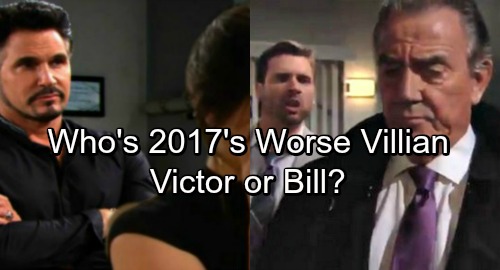 The Bold and the Beautiful spoilers documented Bill (Don Diamont) taking advantage of Steffy’s (Jacqueline MacInnes Wood) vulnerability and therefore violating his son Liam’s (Scott Clifton) trust. But was that a worse offense than what Victor Newman (Eric Braeden) has done to Nick (Joshua Morrow) this year on The Young and the Restless?

Neither villain can be considered a nice guy by any stretch of the soapy imagination. Bill’s been a jerk since he was imagined into reality on B&B in 2009. Of course Brad Carlton (as played by Diamont on Y&R) had to die in Genoa City during that same year so Dollar Bill could exist. But such is life between CBS Daytime’s connected dramas.

Victor has Scrooged his way into everyone’s lives in GC since 1980. He’s had countless wives, with the most prominent one being Nikki (Melody Thomas Scott), and has wronged people across the planet on both personal and business levels in more ways than can be counted.

So why do daytime writers believe that the viewing audiences of both shows, which is predominantly female, want to see men like this? Are they supposed to represent every single one of their grandfathers, fathers, uncles, brothers, sons, nephews, husbands, boyfriends, male cousins, neighbors, friends and co-workers? 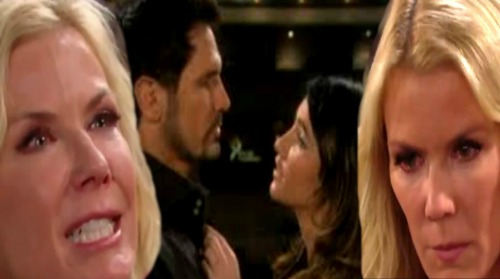 Could the evil Dollar Bill and the dastardly Moustache actually represent both writing staff’s sexist beliefs about men? All knee-jerk reactions that claim female characters are also written to bizarre extremes (which they certain are) miss the main point. This feature is about Bill and Victor, not the females who they’ve wronged.

Of course Bill took advantage of Steffy when she was emotionally wrecked. But he’s had it in for Liam for months and surely was subconsciously, if not consciously, getting back at his son.

Of course Victor has treated Nikki like dirt for years. He couldn’t care less about her feelings because he believes that she loves him, which she does, and will eventually come back to him no matter what he does. But Victor has specifically targeted Nick because he told Nikki and Vickie (Amelia Heinle) that Victor was tied to Chloe (Elizabeth Hendrickson) and therefore to Adam’s (Justin Hartley) death.

No savvy soap fan would dispute that Bill and Victor give into their dark human emotions. No daytime devotee would classify these characters as bad guys unless they were projecting their own sexist views into a soap opera. Right?

Subjectivity is part of what life is all about. Only Bill knows why he did what he did. Only Victor knows why he acts as he does.

No one is an expert on any other human being on the earth. Yes, every person is only an expert on herself or himself. But all soap opera viewers have the right to express their opinions about fictional characters, as this scribe has just done and the readers will do as well.