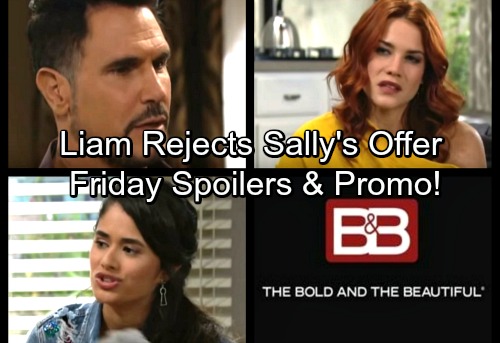 The Bold and the Beautiful (B&B) spoilers for Friday, December 1, tease that Sally (Courtney Hope) will want Liam (Scott Clifton) to be honest about the state of his marriage. He just acknowledged Steffy’s (Jacqueline MacInnes Wood) forgiveness and praised her for being so understanding. Liam feels like his wife is a real gem, but Sally will wonder if he’s putting on a show.

B&B viewers can expect some uncomfortable moments on Friday. Sally will push Liam to tell her the truth. She’ll try to figure out if Liam’s actually happy or if he might be in denial about the extent of his problems. Sally will suggest that she doesn’t like to see people walk away when issues come up. She’ll reiterate that she never would’ve left Liam over a peck in a life-or-death situation.

However, Liam will assure Sally that things are peachy keen now. He’ll definitely believe his marriage is back on track, so Sally will leave his house dejected. Meanwhile, Darlita (Danube Hermosillo) and Coco (Courtney Grosbeck) will finish up their conversation. They’ll agree that Sally deserves a bright future, but Coco won’t know if she’s going to get one with Liam.

Darlita will feel like there’s still hope for Liam and Sally. She’ll point out that if Steffy were out of the picture, Liam would be “magnetically drawn to the woman who shares his demolition dust.” Coco might concur, but she probably won’t believe there’s any chance of Steffy bailing on her man. Now that Liam and Steffy are on solid ground again, Coco may not think anything can break them up.

Of course, The Bold and the Beautiful fans know a dark secret poses a serious risk. Bill (Don Diamont) will remind Steffy that nothing good can come from Liam knowing they slept together. They’ll promise to stay quiet, but Bill will pitch his plan again anyway. He’ll contend that Steffy could still pick him over Liam. Bill believes they’re meant to be, so he’ll give this his best shot.

Steffy will insist that whatever they briefly shared is gone. She’ll refuse to destroy the wonderful connection she has with Liam. The Bold and the Beautiful spoilers say Bill will be disappointed, but he’ll just have to accept Steffy’s decision…for now! We’ll give you updates as other news comes in. Stick with B&B and don’t forget to check CDL often for the latest Bold and the Beautiful spoilers, updates and news.