The Bold and the Beautiful Spoilers for Next 2 Weeks: Liam Gets Bad News – Caroline’s Desperate Mission – Shock Suspects Emerge 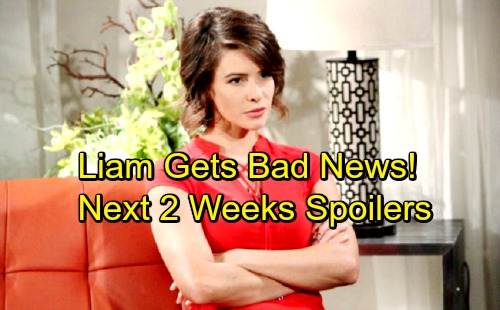 The Bold and the Beautiful (B&B) spoilers for the next two weeks tease that some bombshells are brewing. The week of March 12-16 will bring some tension for Thomas (Pierson Fode) and Sally (Courtney Hope). She may have a problem with him swooping in and thinking she attempted murder.

However, Thomas will manage to settle Sally down eventually. He’ll promise that he truly wants to make amends and get their relationship back on track. The Bold and the Beautiful spoilers say Sally will like the sound of that, so Thomas will be thrilled. Unfortunately, their reunion could face another setback thanks to Caroline (Linsey Godfrey).

B&B fans can expect Caroline to blow back in town on an urgent mission. She’ll be holding out hope that her romance can be saved. Caroline truly loves Thomas and he’s the father of her child. She won’t want their family to break up over a lie that Bill (Don Diamont) started.

Thomas will likely reject Caroline, so that should shift her goals. She may be focused on making Bill pay, so the hospital staff should really keep an eye on him. Caroline could easily try to finish Bill off! Fortunately, we know Bill’s sticking around. He’ll survive this ordeal, so more “Dollar Bill” drama’s ahead.

The Bold and the Beautiful spoilers say a mystery lady will pop up this week, so that info may be referring to Caroline. We should still consider the possibility that it’s someone else though. It’s worth mentioning that Sheila (Kimberlin Brown) will talk to Ridge (Thorsten Kaye) about somebody she’s wronged in the past. Her old victim could be back for vengeance.

Across town, Steffy (Jacqueline MacInnes Wood) and Hope (Annika Noelle) will bond as they watch Liam’s (Scott Clifton) emotional turmoil. These ladies are becoming friends, but that probably won’t last long. They’re in love with the same man, so it should be tough to keep the peace.

Keep in mind that March 15 and 16 will be preempted for March Madness. The week of March 19-23 will deliver more suspects in the shooting storyline. Chief Baker (Dan Martin) and Detective Sanchez (Jeremy Ray Valdez) will add all of Bill’s enemies to the list. No one is safe from charges if the evidence checks out.

Back with Hope, she’ll stun Liam with some big news. Hope will decide she just can’t keep quiet about Bill’s proposal to Steffy. She’ll think Liam deserves the truth, but Steffy may not appreciate Hope’s loose lips. It looks like Steffy could unleash her wrath on Hope soon.

This could spark some hostility between Steffy and Liam as well. Bill’s stuck in a hospital bed, but he’ll still be causing chaos! We’ll give you updates as other B&B details emerge. Stick with the CBS soap and don’t forget to check CDL often for the latest Bold and the Beautiful spoilers, updates and news.