The Bold and the Beautiful Spoilers Next 2 Weeks: Sally Works to Clear Name – Bill Gets Pregnancy News – Xander Haunted by Past

BY Heather Hughes on July 8, 2018 | Comments: one comment
Related : Soap Opera, Spoiler, Television, The Bold and the Beautiful 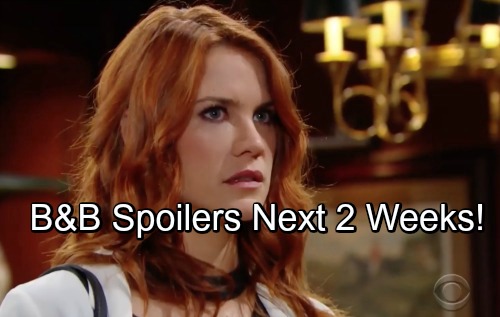 The Bold and the Beautiful (B&B) spoilers for the next two weeks tease that some shockers and shakeups are looming. The week of July 9-13 will bring a familiar face into Xander’s (Adain Bradley) life. Zoe (Kiara Barnes) will arrive on a mission to win back her handsome, British ex. She’ll hit things off as an acquaintance of Emma’s (Nia Sioux), but it won’t take long for the claws to come out.

Speaking of claws coming out, Hope (Annika Noelle) and Steffy (Jacqueline MacInnes Wood) will find themselves at war this week. Steffy will be appalled by Hope’s decision to fight for Liam (Scott Clifton). She’ll do her best to make Hope back off, but this determined Logan won’t budge!

While Steffy and Hope trade threats, Liam will reach out to Wyatt (Darin Brooks). He’ll shock his brother with Hope’s pregnancy news and wonder if he’s got any advice. Will Wyatt pick a side or just urge Liam to follow his heart? Regardless, this is Liam’s choice to make in the end.

Afterward, Bill (Don Diamont) will deliver an apology to Wyatt. It’ll be a big deal since Bill almost never admits he’s wrong. The Bold and the Beautiful spoilers say Wyatt will show his appreciation before dropping a bomb. He’ll explain Liam’s dilemma and inadvertently renew Bill’s hope for a future with Steffy.

At Forrester Creations, Sally (Courtney Hope) will be on the hot seat. She’ll reel after Katie (Heather Tom) and Thorne (Ingo Rademacher) accuse of her harassing Hope. Sally will insist that she knows nothing about the drama online. She’ll deny posting any menacing warnings, but they probably won’t believe her.

During the week of July 16-20, Sally will take matters into her own hands. The Bold and the Beautiful spoilers say Sally will try to clear her name. She’ll realize she needs to find the true culprit if she wants to make that happen. Sally might ask Wyatt (Darin Brooks) for help or she may decide to handle this crisis alone. Either way, Sally had better work fast! Her job is definitely on the line here.

Other B&B spoilers state that Xander’s past will come back to haunt him. Is seems having Zoe around will really stir up problems. Xander will have to make some painful admissions, but Emma will probably understand. Of course, Emma and Zoe’s rivalry will continue to develop. The harder Zoe fights for Xander, the more Emma will push back.