The Bold and the Beautiful Spoilers: Rick Suspected of Shooting Bill – Maya Leans on Carter, Love Blooms as Rick Suffers?

BY Kinsley Goldman on March 14, 2018 | Comments: one comment
Related : Soap Opera, Spoiler, Television, The Bold and the Beautiful 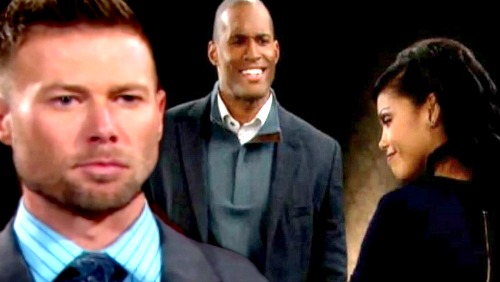 The Bold and the Beautiful (B&B) spoilers reveal that one suspect is flying under the radar. B&B threw Rick (Jacob Young) in as a shooter possibility at the last second. He seemed like an afterthought, but maybe that was by design. Perhaps the show wanted to lay the groundwork, but preserve the surprise. What if Rick really did snap and kill Bill (Don Diamont)?!

People like Ridge (Thorsten Kaye) and Wyatt (Darin Brooks) had more of a reason to be angry with Bill in that moment. However, Bill and Rick have had their fair share of conflict over the years. Since Bill decided to hook up with Steffy (Jacqueline MacInnes Wood), maybe that was just the last straw for Rick. B&B could argue that they’ve been building to this for a while now.

The Bold and the Beautiful fans will recall that Rick has a history of grabbing guns and taking aim. Remember when he caught Ridge (Thorsten Kaye) and Caroline (Linsey Godfrey) making out that time? Rick fired shots to rattle them in the Forrester office. He’s always had anger management issues, so putting a weapon in his hands again would’ve spelled trouble.

Even if Rick didn’t do it, evidence could surface against him. Rick could easily get arrested and endure a tough trial. That’d be the perfect opportunity for Maya (Karla Mosley) and Carter (Lawrence Saint-Victor) to grow closer. She would need someone to lean on if Rick’s facing a lengthy prison sentence.

Maya would worry about losing her husband and Lizzie’s father. She’d feel like her family was being torn apart. Carter could step up to offer reassurance. He could even try to help get Rick off the hook. Of course, love could bloom for Carter and Maya in the meantime. Once Rick was cleared, he might encounter a different type of drama. Rick could have some serious competition for Maya’s heart.