The Bold and the Beautiful Spoilers: Ridge Furious As Bill And Steffy Unite As A Couple

BY hellodrdavis on July 19, 2018 | Comments: one comment
Related : Soap Opera, Spoiler, Television, The Bold and the Beautiful 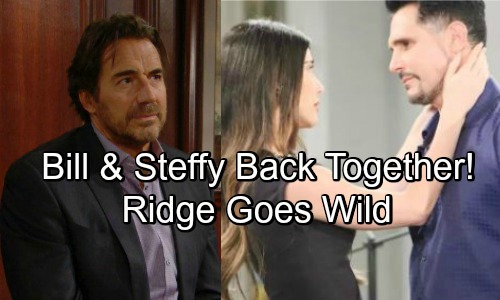 The Bold and the Beautiful spoilers tease that Ridge (Thorsten Kaye) is in for a huge shock. He’s been lobbying hard for Steffy (Jacqueline MacInnes Wood) and Liam (Scott Clifton) to stay together, even though Hope (Annika Noelle) is pregnant with Liam’s baby. He’s even been at odds with Brooke (Katherine Kelly Lang) over the matter.

But nothing will prepare Ridge for the stunning upcoming developments in Steffy’s life. According to B&B spoilers, Bill (Don Diamont) will present Steffy with photographic evidence of Lope kissing. Shortly thereafter, Steffy will catch Lope in the middle of a passionate kiss at Forrester Creations.

Steffy will be devastated, and after much consideration she’ll decide to give Liam the boot and give Bill a chance. Dollar Still will embark on a relationship together. Talk about a shocker for everyone involved! Liam will no doubt be stunned, but Ridge will probably take it the hardest.

Ridge will be absolutely furious that his daughter is taking up with his nemesis. B&B spoilers say that Ridge will have quite the reaction when he sees Steffy wearing Bill’s sword necklace. The symbolism of Steffy being “Bill’s” will probably be too much for Ridge to take, and his protective side will likely come out.

Ridge sees Bill as a predator and Steffy as Bill’s victim, and this will be a perception that will be hard for Ridge to shake. He will be incredulous that Steffy would give up on Liam and seek comfort in someone who has caused so much turmoil in everyone’s lives. Ridge isn’t going to just sit back and let this situation happen. Steffy and Blll will probably get an earful!

It’s hard to imagine a scenario in which Ridge ever “accepts” Dollar Still as a couple. But, it’s Steffy’s choice and Ridge will have to be civil if he wants to spend time with Baby Kelly. Ridge may also harbor some resentment toward Brooke as a result of this situation. After all, Brooke has been pushing Liam in Hope’s direction, and Ridge may partially blame her for Dollar Still coming to be.

It seems that Ridge is going to be on edge for a while. Do you think he’ll be able to handle his daughter being with Bill? Stay tuned to the CBS soap and don’t forget to check CDL often for the latest Bold and the Beautiful spoilers, updates, and news.