The Bold and the Beautiful Spoilers: Ridge Learns About Taylor Shooting Bill – Gears Up For Fight With Brooke

BY hellodrdavis on December 5, 2018 | Comments: one comment
Related : Soap Opera, Spoiler, Television, The Bold and the Beautiful 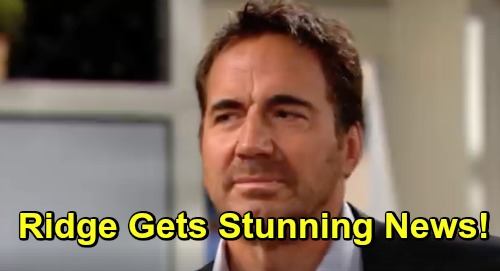 The Bold and the Beautiful spoilers tease that Ridge (Thorsten Kaye) is about to hear a remarkable story. Ridge has been relentless in expressing his hatred for Bill (Don Diamont) lately, and his feelings even led him to tamper with the outcome in Bill’s custody case with Katie (Heather Tom). Ridge took a huge risk in doing so and nearly ended up in jail, but he’s never really regretted his actions.

Of course, Ridge isn’t the only one who has taken adverse action against Bill. Taylor (Hunter Tylo) actually did serious physical harm to Bill when she shot him earlier this year. But until recently this was a well-kept secret. However, thanks to Liam (Scott Clifton), now Brooke (Katherine Kelly Lang) and Hope (Annika Noelle) know about the shooting.

Now that the secret is out, Steffy (Jacqueline MacInnes Wood) will figure that Ridge is going to hear the ugly truth from Brooke, so she’ll decide to preemptively tell Ridge. Steffy will want Ridge to hear the news from her. Ridge will probably be taken off guard by the news, but chances are, he’ll have a cool reaction to the situation.

In fact, Ridge just might approve of Taylor’s actions on some level. Of course, he won’t condone murder, but he’ll probably understand Taylor’s motivation for going after Bill. Taylor and Ridge both despise Bill and blame him for Steffy and Kelly (Zoe Pennington) being on their own and losing Liam.

Steffy will also want Ridge to know that Brooke knows about Taylor shooting Bill. She’ll want to prepare Ridge for the inevitable battle between Brooke and Taylor, plus she knows that the whole situation will cause tension between Ridge and Brooke. Steffy will figure Ridge is better off hearing the news from her first.

Viewers should expect some upcoming arguments between “Bridge” over the whole Taylor shooting mess. Brooke will almost certainly want to turn Taylor in, while Ridge will understand exactly where Taylor was coming from. Do you think Bridge will be able to survive these latest developments? Stay tuned to the CBS soap and don’t forget to check CDL often for the latest Bold and the Beautiful spoilers, updates, and news.