The Bold and the Beautiful Spoilers: Taylor’s Mental State Revealed – Is She Really A Danger To Anyone?

BY hellodrdavis on December 12, 2018 | Comments: one comment
Related : Soap Opera, Spoiler, Television, The Bold and the Beautiful 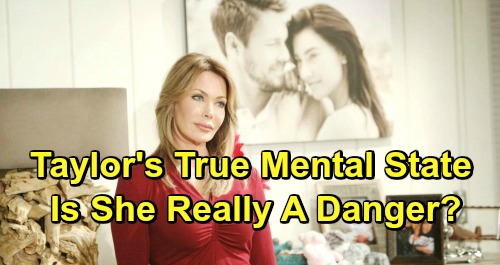 The Bold and the Beautiful spoilers tease that Steffy (Jacqueline MacInnes Wood) will be super stressed in the coming days. She’s been watching her mother’s world blow up in front of her eyes, and there’s nothing she can do about it. It’s no longer a well-kept secret that Taylor (Hunter Tylo) shot Bill (Don Diamont), and that means that multiple people are now weighing in on what Taylor did.

And it seems that everyone’s got an opinion on Taylor’s mental stability. Hope (Annika Noelle) and Liam (Scott Clifton) were very disturbed by Taylor’s demeanor and words when she gave Hope a piece of her mind about being married to Liam. Liam in particular didn’t think it was appropriate for Taylor to be berating a pregnant woman, and both he and Hope are worried about what Taylor might do next.

And Brooke seems to be leading the charge against Taylor spending time alone with Kelly (Zoe Pennington). She’s of the opinion that because Taylor snapped once and shot Bill, she might snap again and who knows what she’ll do. And if this happens around Kelly, then Kelly could be put at risk.

But is Taylor really a physical risk to anyone at this point? Sure, Taylor rants and raves, but does that mean that she’s a risk to Kelly, Hope, Brooke, or anyone else? Taylor loves her granddaughter more than anything in the world, and it’s hard to imagine her causing Kelly harm.

Plus, if Taylor were going to harm Hope or Brooke over the Steffy/Hope/Liam triangle, she’d probably have done it long before now, when the drama was unfolding rather than months later. It’s also interesting that nobody has brought up the risks associated with Ridge (Thorsten Kaye) being around Kelly…after all, Ridge beat up Bill and pushed him over a balcony mere weeks ago.

At any rate, it’s worth asking whether Brooke, Hope, and Liam are over-reacting a bit. Taylor may mouth off a lot, but perhaps she just needs to be listened to. She’s just found a friend in Reese (Wayne Brady), so may she’ll soften around the edges a bit now that someone is taking an interest in her for positive reasons.

Do you think Taylor poses a real risk to anyone? Stay tuned to the CBS soap and don’t forget to check CDL often for the latest Bold and the Beautiful spoilers, updates, and news.