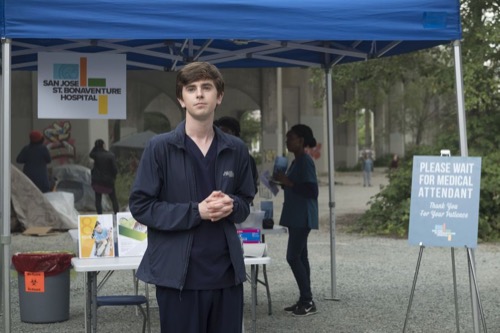 Tonight on NBC their new medical drama “The Good Doctor” airs with an all-new Monday, September 24, 2018, episode and we have your The Good Doctor recap below.  On tonight’s The Good Doctor season 2 episode 1 premiere as per the ABC synopsis, “In the Season 2 premiere, Shaun’s proposed treatment for a homeless patient puts him and Jared in Andrews’ crosshairs. Meanwhile, Claire tries to overcome Melendez’s reluctance to do a risky heart operation while Glassman must overcome his personal feelings about his oncologist, Dr. Marina Blaize, and face a difficult decision about his health.”

The Good Doctor begins tonight with Dr. Shaun Murphy (Freddie Highmore) meeting with Dr. Marcus Andrews, then going to a homeless camp with Dr. Jared Kalu (Chuku Modu) who wants to know what Andrews said in their meeting. He praises him for exceeding his expectations but lacks communication skills, and that needs to change if he wants to stay there. Shaun only tells him the first half and feels Jared should have gone to his own review but he thinks there is no point as it is his last day and it’s obvious what he thinks of him because of where they are standing.

Dr. Morgan Reznick (Fiona Gubelmann) talks to Dr. Claire Browne (Antonia Thomas) about her review; feeling that Andrews would want Claire to be more aggressive, which is exactly what he said but she denies it. Claire bites back asking if he told her to figure out how to be a little less self-centered and realize she is more about the team. She shakes her head. Dr. Neil Melendez (Nicholas Gonzalez) walks into the room and before anyone can speak, Reznick tells him all about their newest patient. Dr. Alex Park (Will Yun Lee) is surprised when Melendez reveals they are not doing a heart transplant but actually sliding in a second one to support the first one.

Shaun talks to a homeless woman (Nneka Croal), and Jared talks to him about his communication encouraging him to work on it since Dr. Aaron Glassman (Richard Schiff) isn’t around. Shaun corrects him, saying Glassman is still around, alive and not going to die as he is going to meet his oncologist today; Jared is surprised Shaun didn’t go with him but Shaun corrects him that he can’t support him emotionally.

Aaron meets with Dr. Blaize (Liza Edelstein), his oncologist. They bicker as she forces him to realize he is the patient and not the doctor and things will be done her way!

Jared and Shaun follow a homeless man named Harry onto their medical bus where they quickly ask him to put down the medications for chlamydia. Shaun diagnoses him with schizophrenia but Harry shows them a back infection in his mouth and Shaun says that smells very bad. Jared is worried the abscess has caused bacterial meningitis and wants to get him back to the hospital as soon as possible but Shaun doesn’t want to as Dr. Andrews won’t happy but agrees when Jared says he will take the blame.

Dr. Melendez and his team meet their patient, but her husband, Elliott (Lane Edwards) isn’t sure about it even after the way Dr. Andrews raved about it to the press. Morgan feels its best Jared isn’t there on his last day as it would be awkward to say goodbye to someone that means so much to Claire. Morgan pushes it saying Claire is far more decent and caring that she is and she was sleeping with Jared for most of the time he was there, so she must be feeling something. Alex catches that Melanie has an aortic aneurysm and two hearts beating into that isn’t so good!

The team regroups and reevaluate the situation. Dr. Melendez leaves the room to tell Dr. Andrews they cannot do the procedure, but once he leaves the room Claire and Morgan brainstorm and comes up with an alternative plan that could work.

Jared and Shaun do a lumbar puncture on Harry to see if he has meningitis. Jared keeps pushing Shaun to be with Dr. Glassman. Just as Shaun tells Harry he needs to stay there a while, Dr. Andrews shoves the curtain open and demands to speak to them. He says if Jared is right, he owes him an apology but if he is wrong he will call Denver and make his life infinitely worse than he is making his.

Dr. Glassman is extremely agitated and restless in the waiting room while Melendez tells Andrews they cannot do the once in a lifetime surgery; but Morgan, Alex and Claire come in with their idea. When Melendez reviews it, he feels it isn’t worth it. Andrews wants to know who’s idea it was and Morgan insists it was Claire’s even though she says it was a joint effort; Andrews reminds Claire they talked about this.

Shaun and Jared wait at the lab for Harry’s results, where Jared doubts himself. Shaun reveals the test is negative but reassures Jared he will fulfill his potential somewhere else and be very happy. Jared scoffs.

Jared tells Shaun to do something else, but Shaun doesn’t want to leave him alone on his last day. Jared again pushes him to be with the man who is facing death – the man who mentored him. Shaun insists he is not facing death. Jared forces Shaun to face it that is exactly what Aaron is facing every moment he is sitting there in the room. Jared realizes Shaun is scared and that by separating himself, he is making it easier, but that is only true for him but not Dr. Glassman. Shaun leaves to do read his book.

Allegra Aoki (Tamlyn Tomita) meets with Andrews, saying this is Melendez’ call but she asks him what Glassman would have done. She advises him not to buy into his fuzzy warmth as he was a manipulator, always finding a way to do what he wanted to do.

Shaun arrives into the waiting room and sits beside Dr. Glassman. Aaron says it is a waste of time him being there. Shaun tells him he told Jared that but he realized he can be with him and read his book at the same time. Shaun orders Aaron to stop throwing crumpled paper and missing the garbage pail, but when he doesn’t, Shaun rips a page out of his book, scrunches it up and calculates where to throw it, stopping when he realizes Harry has a brain tumor and runs out of the room.

Claire needs to know how Jared is doing as Shaun is looking for him, but instead, she asks him to say “hello” to him. Shaun finds him in the change room, says “Hello!” and then tells him that his day isn’t over; Harry has a brain tumor. Shaun asks him to help find Harry because he can’t do it alone as they need to do an MRI to confirm.

Andrews is surprised Melendez hasn’t told the piggyback heart patient the surgery is off, questioning whether he made the right call. Andrews tells him he is “surgeon enough to pull this off” and Melendez tells him to get out of his office. Shaun and Jared return to the homeless camp desperately searching for Harry, the loud noises really affecting Shaun. When they find Harry, Shaun learns Harry is really named “Thomas”, revealing he has a neurological condition and so does Harry but he is curable unlike Harry, who can once again be Thomas once again.

Melendez tells Melanie and Elliott they found an issue but they have a solution, but they will be preparing her for their surgery shortly. He assures them there are risks but he believes he can make this work. Elliott thanks him before he leaves.

Allegra and Andrews watch Melendez watch the surgery. She tells him that the one thing about being president is its always his ass on the line but ultimately he is just a bystander. Andrews is given a note and leaves to confront Jared, saying his day is over and he is making the call to Denver. Jared says he is there because of Shaun, who believed there was something wrong with the patient, communicated and connected with him. Shaun fights for what he thinks is right. Shaun interrupts them to inform them both that Harry has a brain tumor and shows them on the scans; Andrews gives them OR with Dr. Audrey Lim (Christina Chang).

Melendez struggles with his procedure as the tissue is too thin and they have to build an entire new aorta, Alex is concerned about how risky it is, but Melendez is confident. Meanwhile, in the other OR, Dr. Lim removes the tumor and says they will just have to see who wakes up, Edward or Harry. Melendez’ team plugs in the donor’s heart to see if it holds, they connect and take her off bypass. Everyone holds their breath until there are two solid heartbeats; Allegra and Andrews both nod to them as Claire insists on doing the closing as this was her idea in the first place.

Dr. Marcus Andrews holds a press conference, introducing them to Dr. Melendez as the surgeon who did Melanie’s surgery. Jared and Shaun find “Harry’s” family, learning he no longer took his medication and eventually for his daughter’s sake he was asked to leave. Shaun reassures her there was no way she could have known it was the wrong medication. He wakes up and Hannah (Ema Mlinar) and Mary, his wife are happy to see him and he recognizes them. Shaun and Jared leave the room as Jared tells him how much he appreciates what he did out there even if Andrews may not. He thanks Shaun for that, as does Shaun who then walks away.

Aaron sits in the lobby as Shaun joins him at the empty table, asking about his book. Shaun tells him, he said “goodbye” to Jared and he has to stay there with Aaron. Aaron says he doesn’t have to stay there, it’s not up to him as he has a long journey ahead of him and he needs to take it alone. Shaun tells him he understands but he is going with him! Aaron looks at him and they both lean back in their chairs without words.

Claire sits beside Jared, admitting she misses him as a colleague and what they had together and she made a mistake and would like him to stay. He says, “No.” He knows its hard saying goodbye, but that doesn’t make it a mistake and promises he will be okay and believes one day they will both be very happy. He hugs her and giver her a kiss on the head, wiping her tears away before she walks away.

Shaun gets off the elevator at home and finds Lea (Paige Spara) at his door, asking him if he’s going to say “Hello?”