The Royals Recap 4/1/18: Season 4 Episode 4 “Black as His Purpose Did the Night Resemble” 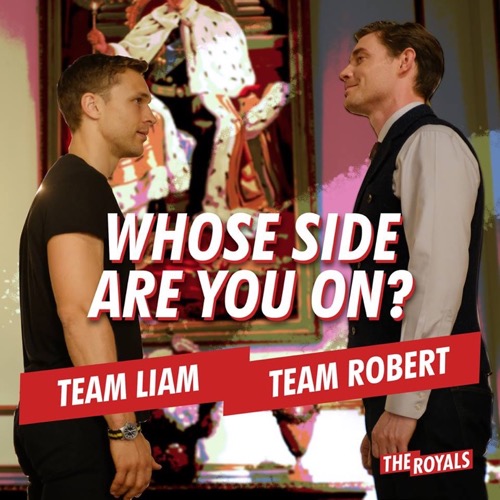 Tonight on E! The Royal’s airs with an all-new Sunday, March 25, 2017, Season 4 episode 4 and we have your The Royal’s recap below.  On tonight’s The Royals season 4 episode 4 called, “Black as His Purpose Did the Night Resemble,” as per the E! synopsis, “A total blackout in London sparks chaos. Willow’s feelings for Robert grow stronger. Eleanor opens the palace to the public. Jasper finds himself in the middle of a riot.”

All of London was experiencing a blackout on tonight’s all new episode of “The Royals” and it was still unclear why Robert planned it.

Robert knew when the blackout was happening. He had it down to the second it happened and had appeared to be pleased with himself when it had occurred, but there were a lot of things at play that was outside of Robert’s control and that was his family. His family was scattered throughout the palace. His mother, uncle, and even his grandmother had all found themselves locked in the cellar where they were hoping to get drunk on the same night they lost power. The only problem was that this set of people didn’t like each other and were going to be trapped for hours while the rest of the palace reacted to what was going on outside.

There was a riot in South London. It was so dangerous that the army had been called in to deal with the problem and so Eleanor had been worried about Jasper. Jasper had gotten discharged that very night and would have to pass through South London to get to the palace, so Eleanor had wanted to go out there to look for him. He was in danger and Eleanor feared what might happened to him now that he wasn’t in a position to help himself however Robert forbid her from leaving the palace. He had demanded that no one be allowed to leave or enter the palace and had given this order to Willow because he decided that he was going to be one of the few people he allowed to leave.

Robert told the two that he was going to go out there looking for Jasper. He said Jasper had saved his life and that it was only fair to return the favor though that only made the two women he was leaving behind worried for him. He had been shot at and was going back to that same location, so they thought he was heading into danger and couldn’t understand why he wasn’t worried. Robert just knew he had no reason to worry. He headed right to Jasper’s location where he thought he would rescue Jasper and surprisingly hadn’t found him. Jasper as it happens had gotten out thanks to his dad.

Jasper’s father came to London because he said he wanted to see Jasper. He had heard about what happened to Jasper on the news and had wanted to see if his son was alright for himself yet Jasper doubted his father’s intentions. His father was a conman that had sold him out once before and so Jasper didn’t want to see his father or accept his help. Jasper just didn’t have any other choice because he was trying to get back to the palace and was too injured to go it alone, so he made it as far the bridge with the older man when they both saw the bridge was closed. In fact, all the bridges were closed because of the riots.

Meaning people were stuck. They couldn’t get to better locations and were often stuck making the best of wherever they landed. That included the people that were gathering outside of the palace because they had seen there was backup generators that were working at the palace and hadn’t wanted to be out in the dark where it was dangerous however Eleanor ended up coming to their aide. She saw them from the palace windows and had decided to invite them all in. She was the top-ranking member of the royal family still in residence (or saw she thought at the time) and so she gave the order to open up the palace.

She invited people in and had even offered them food and beverages. Her brother Liam on the other hand had gone outside to look for Greta. Greta was the girl he was using to get dirt on his brother and it had only dawned on him after the fact that what he did to her was horrible. She was a nice person that didn’t deserve to have him misuse her trust and so he had gone to her apartment hoping to make things better only to learn that wasn’t an option anymore. She had found out what he did from her jerk of a father who had rubbed her face in what she let happened and so she didn’t want Liam around unless he was actually serious about having feelings for her. And he didn’t want to lie to her by saying that those feelings were real.

Liam liked her and had thought they could be friends. He hadn’t thought of her in any other way and so she asked him to leave, but then he had no idea what to do with himself. He wasn’t like Eleanor and even Robert found something to do. He couldn’t rescue Jasper and so he chose to instead cause a social revolution. He went to a bridge and asked the armed soldiers to stand down. Robert made a huge speech in front of the crowd saying that the people deserve better and so he got them out of the dangerous South London. He even took them back to the palace with him where he later apologized to Eleanor because he couldn’t find Jasper.

Except Jasper made it out of South London with his father’s help and so he got back to the palace just fine. He hadn’t brought his father with him and had actually left him behind because he truly wanted nothing else to do with his father following their night together. So it had just been Jasper that came back and had even broke the rules when it came to Eleanor when he saw her again. He kissed Eleanor in a room full of witnesses meaning they could no longer hide their relationship! And so when the light came back on, Helena could have gotten angry about that and she chose not to. She realized something while she was locked up with her mother and it was that her children were great people in spite of her.

Helena was in such a great mood that she greeted her mother’s new boyfriend the count with a smile and so the only one that hadn’t been smiling was Jasper who saw his father fake being an Italian count.

And while Willow first hadn’t wanted to be on Robert’s list of potential queens, she later told him that she changed her mind when she became worried for him.