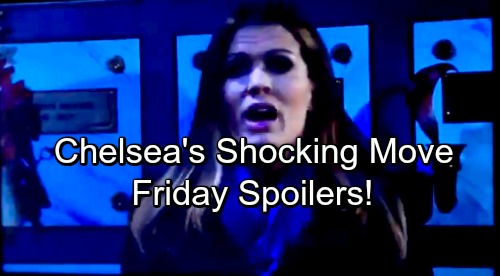 The Young and the Restless (Y&R) spoilers for Friday, February 9, tease that Phyllis (Gina Tognoni) will struggle to contain her rage. She’ll be more certain than ever that Chelsea (Melissa Claire Egan) stole from her own company. Phyllis thinks it’s obvious that Chelsea’s been duping everyone.

However, Phyllis is no longer buying Chelsea’s innocent act and she intends to bring her down. On Friday, she’ll get fed up and confront Nick (Joshua Morrow) about trusting Chelsea. Phyllis will remind Nick of Chelsea’s shady history and all the current evidence against her.

Nick found stacks of cash in the bathroom duct just before the Chelsea 2.0 chaos blew up. That’s not a coincidence, so Phyllis will encourage Nick to wake up. She’ll think he should accept that Chelsea’s still running cons.

Nick has doubts about Chelsea’s innocence deep down, but he won’t want Phyllis to know that. He’s holding out hope that he might be wrong. Nevertheless, Phyllis will warn Nick to stay on guard. Chelsea’s getting desperate, so she’s capable of anything right now.

Meanwhile, Chelsea will react to Thursday’s columbarium shocker. It seems someone has caught her by surprise, but who could it be? There’s no guarantee that Y&R will reveal that yet. This could be a bit of a fake-out. The person may dart off before Chelsea gets a good look at him or her on Friday.

Whatever the case, it appears Chelsea will get her scariest text yet a little later. The Young and the Restless spoilers say Chelsea will face a threat regarding Christian’s (Jude and Ozzy McGuigen) paternity. Chelsea will freak over the possibility of the truth coming out. Despite her fears about Victor’s (Eric Braeden) response, Chelsea will eventually decide she has to tell him what’s going on.

In Friday’s episode, Victor will give a family member some advice that’s difficult to accept. He still considers Chelsea part of the Newman clan, so she might be an option. Then again, Victoria (Amelia Heinle) is dealing with plenty of work drama. She may need Victor to help her out with some guidance.

– Chelsea and Nick (a possible motive for her scheming is expressed in these scenes) pic.twitter.com/jde6MOe4lK