The Young and the Restless Spoilers: Mariah, Tessa and Hilary Fight Over Recast Kyle – Return Shakes Up GC 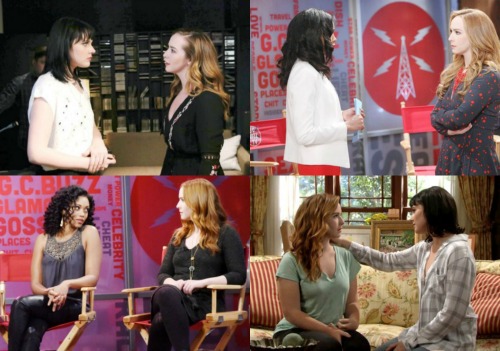 The Young and the Restless spoilers tease that Kyle’s (as most recently played by Lachlan Buchanan) pending return to Genoa City will deeply impact his father. But Jack’s (Peter Bergman) life isn’t the only one that will be affected by this recast character’s revival.

As longtime Y&R viewers recall, the deceased Dianne Jenkins (as last played by Maura West) was killed by Nikki (Melody Thomas Scott) in 2011. Mrs. Newman wasn’t sent to jail for life because her act was deemed self-defense.

Kyle eventually dealt with his grief. He was last seen on Y&R in 2016, when he briefly returned to talk out the end of his relationship with Summer (Hunter King). Dialogue that included mention of Kyle winked at the soon-to-be-realized recast. Jack didn’t even consider that one of his children would send a no-confidence vote to be read at Jabot’s board meeting at the end of last year.

But Kyle did send that message, which was very strange. Why would Kyle oppose his father remaining as head of Jabot? No further explanation was offered, thus establishing a likely heated conversation when this character returns in the near future.

However, Jack isn’t the only person in GC whose life will be impacted by Kyle’s return. A variety of available ladies will surely have their heads turned by whoever becomes the fresh face of Jabot’s still-reigning Chief Executive Officer’s returned son.

And yes, that was a wink at the family cosmetic’s company’s one-time marketing campaign that is about to be remembered by J.T.’s (Thad Luckinbill) arriving friends. Kyle and J.T. didn’t cross paths, as these characters existed during different Y&R time frames. So let’s save that other storyline analysis for another day.

Mariah (Camryn Grimes) recently told Kevin (Greg Rikaart) that she does like guys. So, Kyle might be a new focus for Grimes’ alter ego. Noah (Robert Adamson) just left town, due to Adamson’s cast exit. That makes Tessa (Cait Fairbanks) available. A battle between her and Mariah for Kyle would surely set up another intriguing storyline between both ladies.

Hilary wants Devon, but also knows that he becomes jealous when she’s with another man. So Kyle could prove key in enabling a Hevon reunion.

Of course there are other known, or to-be-added romantic possibilities for this coming-character as well. With whatever plays out, Kyle will soon become a key character in GC. CDL is a leading source for everything linked to The Young and the Restless. Check back regularly for Y&R spoilers and news!