The Young and the Restless Spoilers Next 2 Weeks: Victoria’s Horrible Discovery – Sharon and Billy’s Pity Party – Nick Drawn to Phyllis 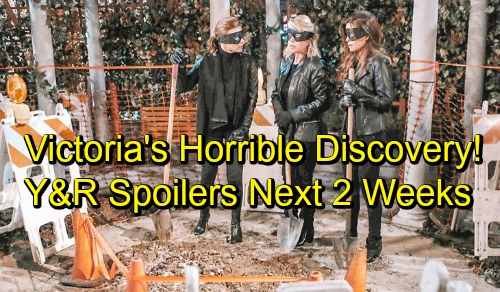 The Young and the Restless (Y&R) spoilers for the next two weeks tease that several Genoa City residents will face turmoil. During the week of October 29-November 2, Lily’s (Christel Khalil) family will be left reeling over her transfer. It’ll hit the Ashbys hard, but Cane (Daniel Goddard) will put on a show of strength for Mattie (Lexie Stevenson) and Charlie (Noah Alexander Gerry).

Devon (Bryton James) will also take steps to help Lily. He’ll seek out Sharon (Sharon Case), who’ll agree to speak with Lily’s case worker. Sharon will hope to get Lily in a halfway house, but that plan won’t pan out. Since Lily won’t meet the criteria, she’ll have to remain at her new correctional facility.

Over with Ashley (Eileen Davidson), she’ll bid her family farewell and catch a flight to Paris. Ashley will unapologetically take the patents she’s owed and prepare for her latest adventure. Y&R fans won’t want to miss Ashley’s last episode, which airs on Monday, October, 29.

Other Young and the Restless spoilers say Phyllis (Gina Tognoni) and Billy (Jason Thompson) will square off. These two have been fighting over personal problems lately, but their latest issues will be professional. Billy’s still power hungry, but Phyllis just might be even hungrier. She’ll present herself as a CEO candidate and battle for the Jabot throne.

Billy will look forward to watching Phyllis crash and burn. He won’t have any faith in her ability to pull this off, but Jack (Peter Bergman) will offer a warning. When it comes to Phyllis, she should never be underestimated! Meanwhile, there’ll be some Halloween amusement at the pumpkin patch and Crimson Lights shindig.

Unfortunately, the cover-up crew will have to tackle a challenge. Victoria (Amelia Heinle), Sharon (Sharon Case), Nikki (Melody Thomas Scott) and Phyllis will head back to the burial site. Due to a broken pipe and water leak, they’ll make plans to exhume J.T.’s (Thad Luckinbill) corpse.

However, a shocking twist will leave the girls’ night gang reeling. Victoria’s disturbing discovery will force them to consider tough options. The week of November 5-9 will deliver even more surprises. Jack (Peter Bergman) will do something daring and hope the risk is worth it.

Will this involve Jack’s new vision for Jabot? They’ll definitely need to make adjustments since Ashley’s leaving them without their major lines! Elsewhere, Nick’s (Joshua Morrow) bond with Phyllis will grow stronger. He’ll finally pull away from Sharon a bit, which will pull him closer to his other ex.

The Young and the Restless spoilers say Sharon will take break from leaning on Rey (Jordi Vilasuso). She’ll end up having a pity party with Billy, which is good since they’ve been in the same boat. Phyllis and Nick’s betrayals turned their lives upside down, so they’ll mull over the losses they cut.

Finally, Rey (Jordi Vilasuso) will make a stunning announcement. Will it be about his estranged wife, Mia (Noemi Gonzalez)? She’s headed to Genoa City soon, so that’s a possibility. Then again, this might be about the secret that’s buried deep within the Rosales clan. Regardless, Rey’s news will catch people off guard.

It sounds like the excitement’s revving up. We’ll give you updates as other Y&R details emerge. Stay tuned to the CBS soap and don’t forget to check CDL often for the latest Young and the Restless spoilers, updates, and news.