BY Heather Hughes on December 4, 2018 | Comments: one comment
Related : Soap Opera, Spoiler, Television, The Young and the Restless 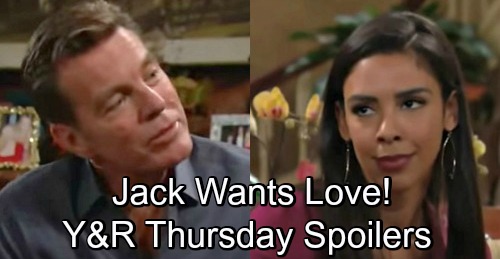 The Young and the Restless (Y&R) spoilers for Thursday, December 6, tease that Arturo (Jason Canela) will find himself in a tricky situation. He’ll land in the middle of some conflict involving Mia (Noemi Gonzalez). There’s a good chance Abby (Melissa Ordway) or Rey (Jordi Vilasuso) will get in on this drama as well. When Mia’s causing trouble, one of them is usually lurking to chew her out.

Of course, Abby’s involvement would cause the most problems for Arturo. He doesn’t like being caught between his past and his present, but that’s where he’ll find himself. The Young and the Restless spoilers say Arturo will rush to his ex’s defense. He’ll side with Mia on some issue, to you can bet that’ll cause some chaos.

Even if Abby only finds out afterward, she won’t approve of Arturo stepping up for Mia. He needs to be steering clear of her, not finding ways to grow closer again. Y&R fans know Abby’s been wary since she learned about Mia and Arturo’s history. She doesn’t want to get burned, but Thursday’s episode may convince Abby that she will be.

The Young and the Restless spoilers say Abby and Arturo’s relationship could continue to crumble. Mia seems determined to have her cake and eat it, too. She keeps insisting that she wants to fix her marriage, but her dangerous games with Arturo may prevent that. Is another cheating scandal brewing for the Rosales family? Time will tell, but things certainly could be headed in that direction.

Sharon (Sharon Case) and Rey will remain close as well, there’s another cheating risk. They may be unable to avoid their spark in the coming weeks. Until then, Jack (Peter Bergman) will be the one feeling a spark with Kerry (Alice Hunter). Thursday will bring some warm moments along with plenty of charm. Jack’s really doing his best to sell himself as boyfriend material.

Kerry had a great time chatting with Jack after the Thanksgiving festivities. Unfortunately, she decided to bail soon after. Kerry may be hesitant to open herself up to heartache, but Jack will hope he can break through that barrier. He’ll want Kerry to take a chance on love!