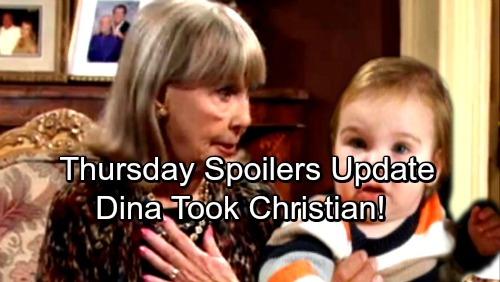 The Young and the Restless (Y&R) spoilers for Thursday, January 4, tease that Chelsea (Melissa Claire Egan) will panic over Christian’s (Jude and Ozzy McGuigen) disappearance. She’ll face Nick’s (Joshua Morrow) fury when he shows up. Lauren (Tracey E. Bregman) will rush to Chelsea’s defense before blasting Abby (Melissa Ordway) for her role in the cheating scandal.

Abby will point out that Scott (Daniel Hall) was the cheater in this scenario. When Scott appears, he’ll side with Abby on this. Scott will try to explain his actions, but Lauren won’t think his excuses are acceptable. Back with Nick, he’ll fill Paul (Doug Davidson) in on the situation as his emotions get the best of him. Sharon (Sharon Case) will worry about the toll this could take on Nick.

Nick and Chelsea will play the blame game for a bit, but they’ll ultimately embrace over this crisis. They’ll lean on each other during this difficult time. At the Abbott mansion, Ashley (Eileen Davidson) will meet with a new lawyer named Tony Kingsman (Michael Masini). Michael (Christian LeBlanc) will warn Jack (Peter Bergman) that this hotshot tends to play dirty.

Ashley will plan on making a power play, but Dina’s (Marla Adams) actions will change the game. The Young and the Restless spoilers say Jack will realize Dina scooped up Christian. She’ll happily watch the kid and talk about how he’s “Jackie.” Jack will quickly call Nick to give him updates. Afterward, Jack and Ashley will determine that they can’t handle Dina without some serious help.

Ashley won’t be needing that lawyer for her fight with Jack, but maybe Tony can pitch in with the Graham (Max Shippee) battle that’s brewing. Of course, Michael (Christian LeBlanc) could take the lead instead. As long as the Abbotts destroy Graham, they won’t care who makes it happen. However, Y&R spoilers suggest that Graham will be a tougher opponent than expected.

In the meantime, Sharon will scoff when Scott produces an engagement ring. She’ll throw it in the dirt and smash it down with her shoe. Sharon will argue that Abby can have Scott. She won’t be interested in patching things up.

Other Young and the Restless spoilers say Nick will be relieved over the Christian misunderstanding. He’ll hug Chelsea as they rejoice over the boy being found safe and sound. Nick will reflect on losing Cassie (Camryn Grimes) and contend that he’d hate to lose Christian as well.

Chelsea will look upset over Nick’s statement. It sounds awfully ominous! Y&R may be dropping hints about Nick losing Christian to an Adam recast. We’ll keep you posted as other news comes in. Stick with the CBS soap and don’t forget to check CDL often for the latest Young and the Restless spoilers, updates and news.