BY Heather Hughes on May 2, 2018 | Comments: one comment
Related : Soap Opera, Spoiler, Television, The Young and the Restless 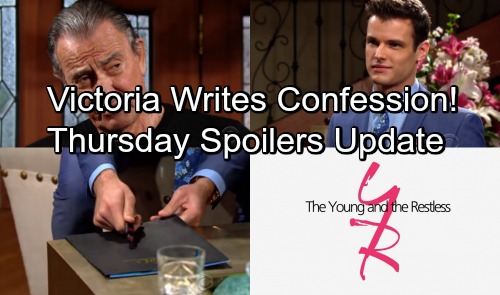 The Young and the Restless (Y&R) spoilers for Thursday, May 3, tease that Nikki (Melody Thomas Scott) will summon Sharon (Sharon Case) and Phyllis (Gina Tognoni) for a meeting. She’ll insist they have a major crisis on their hands. Once they arrive, Victoria (Amelia Heinle) will explain her plan to confess. She’ll go through her bogus story of killing J.T. (Thad Luckinbell) and leave the others out of it.

Phyllis will argue that there’s no way Paul (Doug Davidson) will buy this. It wouldn’t take him long to figure out they were all involved. Since Nikki’s the real killer, she won’t want Victoria to take the fall either. Even Sharon will believe this a bad idea. She’ll admit she’s struggled with the secret so far, but she’ll promise she won’t be a problem anymore. Sharon will think they need to honor their pact.

Later, Phyllis and Sharon will still be worried about Victoria blabbing. Y&R spoilers say Phyllis will decide to check in with Victoria again. She’ll want to be sure the secret’s safe. At home, Victoria will write a letter to Nikki and Victor (Eric Braeden). Her heartfelt note will include why she’s turning herself in. 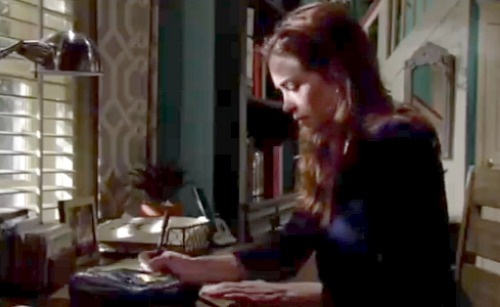 Fortunately, Phyllis will show up in time to stop Victoria. Nikki will also return to talk some sense into her daughter. The Young and the Restless spoilers say Nikki will have a suggestion that might help. She’ll think Victoria needs to get out of town for a while and take a break from all the J.T. drama. Phyllis will want to tag along for support, so they’ll come up with a convention excuse.

Afterward, Phyllis will break the news of her trip to Billy (Jason Thompson). She’ll mention that Victoria will be representing Newman Enterprises, so she’ll have some company. At Crimson Lights, Neil (Kristoff St. John) will chat with Charlie (Noah Alexander Gerry) about Alzheimer’s. His inspiration will help Charlie put together Dina’s (Marla Adams) video.

Other Young and the Restless spoilers say Billy will catch Kyle (Michael Mealor) talking to Victor. He’ll gripe about Kyle hanging out with Jack’s (Peter Bergman) nemesis. This obviously isn’t helping Kyle earn the Abbotts’ trust, but Kyle will continue their conversation anyway.

Once Billy’s gone, Kyle will mention his latest weapon. He’ll reveal that he’s found something of great power to use against Jack. Victor will push his young ally to spill all, but it looks like Kyle may be reluctant. Sharing Jack’s paternity is a big decision, so Kyle should think long and hard before he blurts out the truth!

Y&R fans can expect Victor to rev up the pressure, but Kyle will do his best to stay strong. We’ll give you updates as other details emerge. Stick with the CBS soap and don’t forget to check CDL often for the latest Young and the Restless spoilers, updates, and news.