BY Heather Hughes on March 6, 2018 | Comments: one comment
Related : Soap Opera, Spoiler, Television, The Young and the Restless 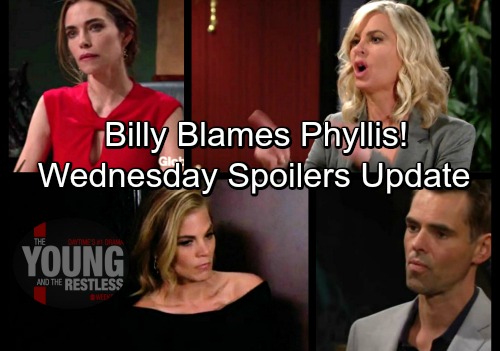 The Young and the Restless (Y&R) spoilers for Wednesday, March 7, tease that Ashley (Eileen Davidson) will urge Lily (Christel Khalil) to pick a side. She’ll fill Lily in on Victoria’s (Amelia Heinle) setup and wonder if J.T. (Thad Luckinbell) might be in on it. Ashley will hope Lily can learn more info.

Meanwhile, Victoria will try to show some appreciation for her employees. She’ll bring in a big box of doughnuts, but J.T. will scoff at her attempt to win the staff over. When Ashley walks in, she’ll rant about Victoria framing her. Ashley will argue that this sloppy plan won’t work, but Victoria will count on Victor (Eric Braeden) firing her rival soon. 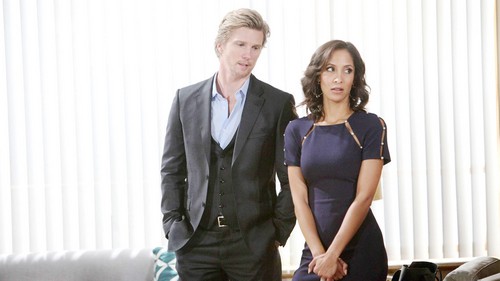 Afterward, Lily will want to leave work early. She scheduled a half day in advance, but Victoria won’t let her go. Across town, Devon (Bryton James) will rush to Hilary’s (Mishael Morgan) defense during a chat with Cane (Daniel Goddard). The Young and the Restless spoilers say Cane will still be angry about the recorded confession. He’ll gripe about Hilary not coming clean before she got caught. 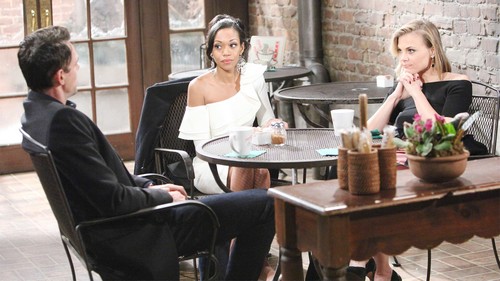 Cane will shut down Charlie’s plans and insist that college is indeed happening. He’ll suggest that this isn’t up for debate. Back at Newman Enterprises, Y&R spoilers say J.T. will get grilled. Ashley will demand to know how J.T. scored the papers from Jack’s (Peter Bergman) office. J.T. won’t offer a straight answer, so Ashley will put the issue aside and head to the employee appreciation meeting.

Victoria will encourage an honest discussion, which Ashley certainly won’t have a problem with. The Young and the Restless spoilers state that Ashley will launch a tirade about Victoria’s behavior. Of course, Victoria will pretty much ignore Ashley’s complaints.

Lily will chime in soon after. She’ll object to Victoria springing this meeting on everyone at the last second. Victoria will respond by complaining about Lily’s poor performance. That’ll be the last straw for Lily. She’ll storm out and Ashley will eventually stomp off as well. Victoria will wonder why J.T. didn’t back her up, but he’ll just criticize how she handled everything.

At home, Lily will give Cane updates on what happened. When she considers quitting at Newman, Cane will be behind Lily 100 percent. He won’t want her to stay there if she’s not happy. Lily will make her way back to Victoria’s office to deliver her resignation.

Elsewhere, Billy (Jason Thompson) will confront Phyllis (Gina Tognoni) about her need to interfere in Nick’s business. Phyllis will feel like Nick’s putting himself in a terrible situation with Sharon (Sharon Case). She won’t want to stand by and let it happen.

Billy will hint that Phyllis is partially to blame for Nick’s trouble. He’ll object to the way Nick found out about Christian’s (Jude and Ozzy McGuigen) paternity. Billy will gently point out Phyllis’ impulsive nature and suggest that she needs to rein it in.

Over with Hilary, Devon (Bryton James) will approve of how well she works with Shauna (Camryn Hamm). He’ll want to write a check to help Shauna out with college. Hilary will think encouragement is a better solution. When she asks Devon to join them for their next mentoring meeting, he’ll be on board.

It sounds like Devon and Hilary are making progress. We’ll keep you posted as other Y&R news comes in. Stay tuned to the CBS soap and don’t forget to check CDL often for the latest Young and the Restless spoilers, updates and news.