BY Marcy Cohen on June 24, 2018 | Comments: one comment
Related : Soap Opera, Spoiler, Television, The Young and the Restless 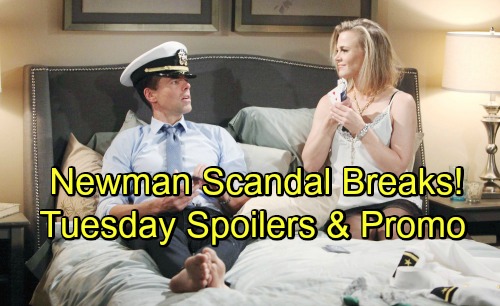 The Young and the Restless (Y&R) spoilers for Tuesday, June 26, tease that Victor (Eric Braeden) and Nikki (Melody Thomas Scott) will face a fierce fight. They’ll be forced to defend their public images, so it sounds like more drama’s brewing. Y&R fans know that someone has access to inside info at Newman. He or she also managed to get some personal details, which means some family secrets are at risk.

Monday’s new Y&R episode, June 24, brings a scandal regarding Victor’s health crisis. That may be something he has to handle on Tuesday. Victor might arrange an interview and hope to set the record straight. The Young and the Restless spoilers say he’ll indeed go live later this week, June 25-29. Victor will continue to assume J.T.’s (Thad Luckinbill) behind all this, so he’ll be determined to take the abusive monster down.

It sounds like Nikki’s name may be dragged through the mud as well. Perhaps her reputation will take a serious hit. Nikki and Victor had an open marriage for a while. She was off banging Arturo (Jason Canela) while Victor was getting busy with Helen (Sitara Hewitt). They eventually bailed on that plan and recommitted to each other, but that may not be the story told in the media.

The headlines may be all about the affairs and scandals rocking the Newman clan. Whatever the case, Nikki and Victor will try to stick together on this. She hates what he did to Nick (Joshua Morrow), but they have to stop the bleeding at Newman Enterprises. Now’s not the time to focus on grudges.

Other Young and the Restless spoilers say Phyllis (Gina Tognoni) and Billy (Jason Thompson) will spice up their romance. They’ll have some balcony sex and do a little role play in the bedroom. Billy and Phyllis definitely enjoy hitting the sheets. They’d better make the most of their time together because it could be running out. Summer (Hunter King) should throw quite a curveball “Philly’s” way soon enough.

Speaking of Summer, she’ll hang out with Kyle (Michael Mealor) in Tuesday’s episode. The Young and the Restless spoilers say they’ll head to the pool for some skinny dipping. Kyle will be a bit hesitant, which is odd since he showed his junk on live TV! It seems it’ll be different in a private moment with Summer. Nevertheless, Kyle will ultimately overcome his uncertainty and strip down with his ex.

It looks like some steaminess is ahead in Genoa City. We’ll give you updates as other Y&R news comes in. Stay tuned to the CBS soap and don’t forget to check CDL often for the latest Young and the Restless spoilers, updates, and news.