The Young and the Restless Spoilers: Week of December 10 – Bitter Revenge, Cruel Tactics and Dangerous Secrets

BY Heather Hughes on December 7, 2018 | Comments: one comment
Related : Soap Opera, Spoiler, Television, The Young and the Restless 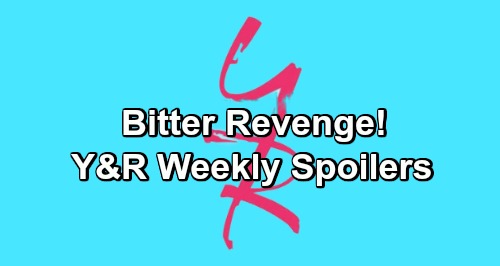 The Young and the Restless (Y&R) spoilers for the week of December 10-14 tease that big changes are brewing in Genoa City. For starters, Mariah (Camryn Grimes) will start to see things in a different light. She’s been supportive of Sharon (Sharon Case) and the rest of the cover-up crew, but that’s about to change thanks to their appalling tactics.

Victoria (Amelia Heinle), Nikki (Melody Thomas Scott) and Sharon are all behind Tessa’s (Cait Fairbanks) terrible kidnapping. After the truth comes out, Mariah will be forced to pick a side. She’ll feel the need to protect Tessa since she made a mistake in trusting the girls’ night gang. Their harassment is out of control, so Mariah will rip into Sharon and soften toward Tessa over her struggles.

Meanwhile, Jack (Peter Bergman) will do something daring. He’ll probably make a move that he hopes will impress Kerry (Alice Hunter). She seems to be about all that’s on Jack’s mind these days! Over with Cane (Daniel Goddard), he’ll extend an olive branch to Devon (Bryton James). Cane will be sorry if he’s come across as too pushy lately. He’ll assure Devon that he only wants what’s best for him.

Other Young and the Restless spoilers say Phyllis (Gina Tognoni) will keep Nick (Joshua Morrow) in the dark. She may decide he doesn’t need to know about her visit with Billy (Jason Thompson) or the intense moment they shared. Of course, secrets tend to spell trouble in relationships. Phyllis should know that better than anybody!

Meanwhile, Mia (Noemi Gonzalez) will stir up trouble as usual. She always finds a way to make a bad situation worse. Y&R fans can also expect Reed’s (Tristan Lake Leabu) comeback this week. He’ll be enraged over the lack of progress in the J.T. (Thad Luckinbill) investigation. Reed will desperately want to know if his father’s alive or not.

Since J.T.’s body is still out there somewhere, Reed will cling to hope that his dad survived. However, Reed will be prepared for the alternative. He’ll insist that if J.T. has indeed been murdered, he’s going to make the killer pay! Billy (Jason Thompson) will let Victoria know her son’s coming unhinged. He’ll think Nikki needs to keep a close eye on Reed before he spins out.

Nikki (Melody Thomas Scott) and Victoria will have their hands full after Reed finds out Victor (Eric Braeden) is Rey’s (Jordi Vilasuso) prime suspect. After a confrontation with the teen, Nikki will cave in and have that drink she’s been wanting. This could certainly send her down a dark road.