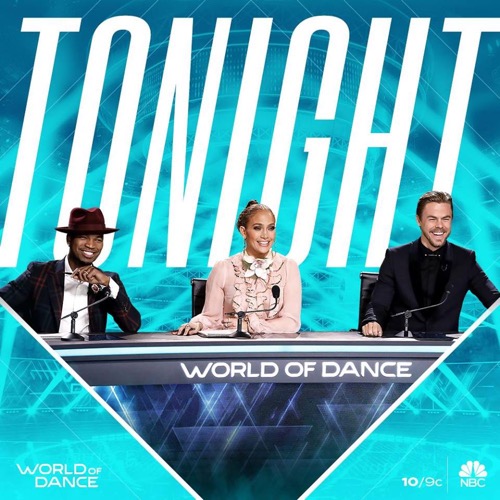 Tonight on NBC the World of Dance’s the second season airs with judges Jennifer Lopez, Derek Hough and Ne-Yo with an all-new Tuesday, June 26, 2018, episode and we have your World of Dance recap below. On tonight’s Word of Dance season 2 episode 5 as per the NBC synopsis, “A qualifying round.”

The qualifiers continue on tonight’s all new episode of “World of Dance”. People around the world come together to try-out for this once in a lifetime opportunity and the first dance group of the night happened to have the best resume. The group ‘Embodiment’ consist of thirteen men who have all danced as backup dancers to some of the biggest names out there and one of them was even a backup dancer to Jennifer Lopez for her Las Vegas residency. Rudy was the choreographer for the group and he had been nervous. He later explained to Jena Dewan that he was used to dancing next to J.Lo and not dancing in front of J.Lo. Rudy dreamed of becoming a famous choreographer and so all he wanted to do was make a good enough impression.

Thankfully, he was able to do with Embodiment. Embodiment danced to Imagine Dragos “Believer” and they gave a strong performance because technique came across more than anything else, but then the group was talking and Rudy was saying that even if they didn’t go all the way that they still wanted to leave an impact and that had thrown the judges. Jennifer told Rudy that if he wanted become an in-demand choreographer that he truly needed to go all the way because everyone remembers who won and not so much who came in second or third. So ambition was needed in this game and there were other things that the judges wanted to bring up. Both Ne-Yo and Derek thought there were a few moments in the dance that they could have gotten be more fluid.

They said the music especially offered those moments and so the group had been worried when it came to judging. They waited as Ne-Yo gave 80, Derek gave 86, and Jennifer gave them 88. That was enough to forwards them in the next round and it was onto to the next dancers. The next was a couple of ten-year-olds and they brought ballroom dancing to the stage. The two were Daniel and Mishella and they danced like they were pros and besides the few mistakes thrown in they were definitely great for their age. The judges even laughed amongst themselves because Daniel looked like a young Derek Hough and so everyone had a few laughs until they got down to business. Ne-Yo was the judge that said there were a few things that didn’t work because small technical stuff.

Ne-Yo gave them 80, Derek gave them 81, and Jennifer gave them 86. All of which means they’ll be moving onto the next round. Now, this next group danced in a category called Heels and that’s when everyone dances in super high heels. It looks easy and is in fact quite hard. The group called themselves the Heartbreakers and their leader Melissa formed the group because she grew up admiring all the great performers that were able to dance in their heels. Like Janet Jackson, Brittany, and also J.Lo. So when this incredible beautiful group came in dancing in heels, they brought the sexy and the judges both admired that and also didn’t want that to become a crutch. And so all the judges told the women that if they moved forwards that they expected to see much more.

The judges went to voting and Ne-Yo gave them 83, Jennifer gave them 86, and Derek gave them 82 which means they are going onto the next round. The next dancer that went up was a twelve-year-old Contemporary dancer. Madison Brown had a hard time finding her way when she was younger and her mother introduced her to dancing to help. Well, it did help. It gave Madison a passion for dancing and she gave quite a beautiful performance that wowed the judges because they thought she was a lot older than she was. They even admitted that afterwards because they said she did not look twelve when she was dancing and so they got around to judging the incredible talented young woman.

Ne-Yo gave her 84, Jennifer gave her 88, and Derek gave 89. Madison Brown probably scored the highest of the night and that more than anything ensured she was moving onto the next round. The next group that went up was called Fresh. They too were in the junior league and were great. Fresh was a group of four kids dancing Hip Hop and they were great on their feet. They gave intense and powerful, but they lacked personality onstage and so the judges warned them about that because they didn’t want that to sink them if the moved forward. The judges got down to voting and so they scored an 83 from Ne-Yo, an 84 from Jennifer, and an 85 from Derek. That was more than enough to propel into the next round.

The next group for the night was Silver Beat. They danced Afrodance and the group consisted of men and women from all over Africa. They danced together to raise enough proceeds to buy vaccinations as well as other necessary items for people suffering in Africa. So it was great to seem them dancing and everyone wanted to enjoy it. There was just not strong enough in the technical sense and so the judges asked them to expand. The judges loved the energy and they loved the group, so even as they scored lower than they needed to stay, the judges asked them to return to the stage stronger next year. And if ever there was a time to see someone returning to the show after a defeat, the return of Royal Flux helped show that anything was possible.

Royal Flux had made it to the double duel when they got eliminated and they took from that a learning experience. They knew they were capable of more and so they returned hoping to prove that to the judges yet one of their own was injured on the day of. She broke her foot and said she still wanted to dance through it. She said she could do it and not that surprisingly Royal Flux gave an incredible performance despite such a huge injury. The judges loved the performance and they all congratulated the athlete that didn’t let anything stop her from dancing, so the one thing the judges thought needed to be fix was that the routine should have been tightened up more. And so the judges voted once they stopped heaping all the praise on this group.

Ne-Yo gave them 82, Derek gave them 89, and Jennifer gave them the highest score of the night at 91!

So Royal Flux will be joining the others in the next round.