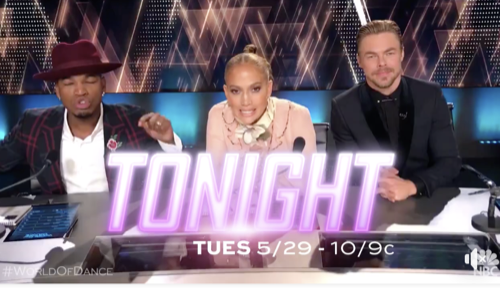 Tonight on NBC the World of Dance’s second season premieres with judges Jennifer Lopez, Derek Hough and Ne-Yo with an all new Tuesday, May 29, 2018, episode and we have your World of Dance recap below. On tonight’s Word of Dance season 2 episode 1 as per the NBC synopsis, “Dancers from all ages have one chance to showcase their artistry, precision, and athleticism, in order to move forward in the competition and ultimately win a prize of $1 million dollars.”

Derek, Ne-Yo and JLo are introduced and take their seats. They welcome Jenna as host to the stage. She announces that there will be some fierce competition.

Up first, a male group from India named Desi Hoppers. Dressed in white with colorful striped sleeves, they tale formation before dancing to Ed Sheeran’s In Love with The Shape of You. The crowd goes wild. JLo loved how they brought their culture into the performance. Ne-Yo thinks they were clean and precise. Derek loved their symmetry. They are sent to the next round after scoring higher than 80.

Jenna meets with a hip-hop fusion duo, Sean and Kaycee. They have been working together for the last year.  They take the stage and blindfold themselves. JLo is mesmerized by them. The audience goes crazy. JLo was touched. She thought their dance was beautiful. She tears up. Derek thinks their timing and choreography was impressive. Ne-Yo was impressed how in sync they were.

Up next, a large dance group called S-Rank. A dozen dancers take the stage in black with white caps. They op and lock with some gymnastics. Derek is thrilled. Ne-Yo cannot believe they stayed so uniform. They receive a score of 91. They move to the next round.

Sixteen year old Jaxon Willard from Utah tells his story. He is shy and was raised by an all-white family after being adopted. Dance is his outlet. His performance represents how he feels. His mother hugs him before he takes the stage. His flexibility and gymnastic talents make the crowd go wild. JLo is crying. She wants to know his story. She loves that she let his vulnerability to be seen. Ne-Yo is proud. Derek gets choked up. He tells him he is beautiful as a dancer and a storyteller. He gets a 94 and moves on to the next round.

An all female dance crew takes the stage and dances to an upbeat song. All three judges think they need to work on their choreography. They make it through with an 82.7.

Hilty and Bosch, dance legends in Japan, take the stage in all white suits to show off their famous locking and popping. All three of the judges tell them they need to bring more to the competition as a duo. They don’t make it through with only a 78.3.

Karen and Ricardo from Chile are a couple and dance partners. They perform a salsa. JLo thinks they set the stage on fire. Derek gets up and jumps up and down. Ne-Yo is beside himself. He thinks it is the first $1 million performance. They score a 99.7! The crowd goes wild as they kiss. Jenna hugs them when they get off the stage.