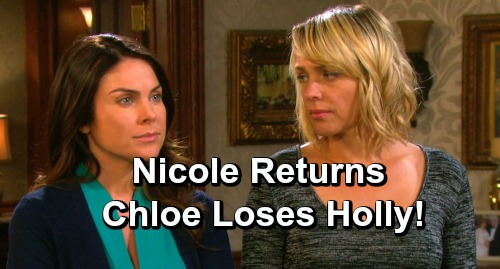 Days of Our Lives (DOOL) spoilers tease that Chloe Lane (Nadia Bjorlin) will face some heartache. She’s been stressed out lately thanks to El Fideo’s (Andoni Gracia) vengeful associates, but Stefan (Tyler Christopher) has promised to keep her safe. Of course, Chloe’s also worried about the kids. Parker Jonas (Christian Ganiere) and Holly Jonas (Harlow and Scarlett Mallory) have to be her main concern.

Brady Black (Eric Martsolf) doesn’t like that Chloe’s living at the DiMera mansion and growing closer to Stefan. He’ll keep scheming to keep them apart and hopefully score Chloe for himself. Days of Our Lives spoilers say Brady will even plant a kiss on Chloe. He’ll make his move during the week of March 25-29 and try to pump the brakes on her ill-advised romance.

However, Chloe may not respond the way Brady wants. Stefan will end up confronting Chloe later, so she might suggest the kiss was all one-sided. Perhaps it’ll be forgiven and forgotten soon enough. Regardless, Brady will keep working on his plan with Gabi Hernandez (Camila Banus). He’ll do whatever it takes to drive a wedge between Chloe and Stefan.

Things should get even more complicated when Nicole Walker (Arianne Zucker) returns to Days in April. She’ll naturally want her daughter back, especially since Holly is in danger. An assassin shot through the window of the home this little girl’s living in. This just isn’t the ideal environment and targeted Chloe isn’t the ideal guardian.

DOOL spoilers say there might be a custody battle or Chloe may just hand Holly over. Deep down, she might know Nicole is right. Parker can always be shipped off to Grandma’s house, but Chloe may determine that Holly needs to be with her mom. Holly’s been missing Nicole anyway, so Chloe might put Holly’s needs first and refuse to put up a fight.

No matter how this plays out, the result will be the same. Days of Our Lives spoilers say Chloe will lose Holly again and deal with plenty of heartbreak. She’s come to think of Holly as her daughter, so this could help strengthen Chloe’s bond with Stefan. He lost Charlotte DiMera and could relate.

All of this may hinder Gabi and Brady’s team effort, but they won’t throw in the towel. Stefan will kiss Gabi next week, so she’ll be off to a nice start. Gabi will just have to step up her efforts later if Chloe gains the lead.

Any Holly drama that hits can’t stop Gabi, but her growing feelings just might make a mess! We’ll give you updates as other Days news comes in. Stay tuned to DOOL and don’t forget to check CDL often for the latest Days of Our Lives spoilers, updates and news.