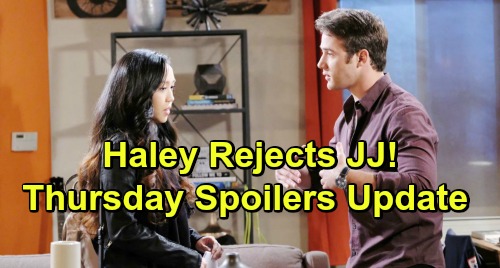 Days of Our Lives (DOOL) spoilers for Thursday, March 21, tease that JJ Deveraux’s (Casey Moss) suggestion will be rejected. He just offered to marry Haley Chen (Thia Megia), but she definitely won’t be on board with that plan. JJ’s been caught up in this news story since Haley was staying at his place. His dad, Jack Deveraux (Matthew Ashford), is also the one who’s led the charge against Haley.

Haley will argue that their marriage would be called a sham in a heartbeat. She’ll think it’ll only make things worse, but JJ will plead his case. He’ll argue that their former living arrangement can work in their favor. JJ will believe they can make their relationship look legit and convince the judge to let Haley remain in the country.

Nevertheless, Days of Our Lives spoilers say Haley will stand her ground. She won’t allow JJ to cause legal trouble for himself, so he’ll just end up frustrated. DOOL fans can expect Haley to fill Tripp Dalton (Lucas Adams) in later. He’ll offer himself as an alternative groom, but Haley will have many of the same concerns. However, Tripp will ultimately convince Haley they can pull this off.

In the meantime, Sarah Horton (Linsey Godfrey) will have a deep conversation with Maggie Kiriakis (Suzanne Rogers). She’ll open up about her growing feelings for Eric Brady (Greg Vaughan) and that steamy kiss she planted on him. Days spoilers say Sarah will admit she’s fallen hard, but Eric turned her down. It sounds like Sarah will be an emotional wreck, so Maggie will do her best to provide support.

Other Days of Our Lives spoilers state that Rafe Hernandez (Galen Gering) will surprise his wife. He’ll want to make Hope Hernandez (Kristian Alfonso) feel special on their anniversary, so he’ll plan a lovely dinner for her. They’ll renew their commitment to a future together, but you can bet more obstacles are headed their way.

Days viewers won’t want to miss all the complicated drama in Salem. We’ll give you updates as other details emerge. Stick with DOOL and don’t forget to check CDL often for the latest Days of Our Lives spoilers, updates and news.