BY hellodrdavis on April 28, 2019 | Comments: one comment
Related : Days of Our Lives, Soap Opera, Spoiler, Television 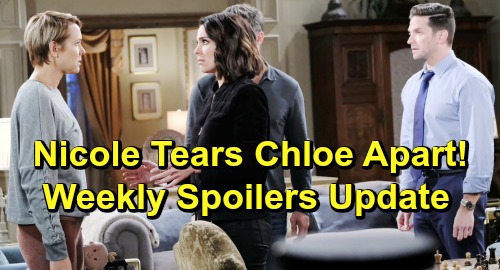 Days of Our Lives (DOOL) spoilers tease that we’re in for an exciting week full of big returns. As DOOL viewers know, Nicole Walker (Arianne Zucker) has returned in a big way, and Eric Brady (Greg Vaughan) has just encountered Nicole at his apartment. According to the new weekly video promo, Nicole and Eric will have a tender and emotional reunion.

It seems that Eric and Nicole will forget that there’s anyone else in the room, as Nicole tells Eric that “it’s really me.” They’ll embrace, as a horrified Sarah Horton (Linsey Godfrey) watches. Of course, moments earlier, Sarah and Eric had declared their feelings for each other, and they were on their way back to the apartment to tell Rex Brady (Kyle Lowder) all about it.

But that plan will be crushed to pieces, and Sarah will be devastated. The promo shows Sarah looking very upset and later throwing something across the room in frustration. Her dreams of being with Eric are now completely crushed, as she knows that Nicole is back to claim her man.

But it doesn’t look like things will be smooth sailing for Nicole and Eric going forward. The DOOL promo shows Eric and Sarah sharing a moment in the apartment, with Nicole walking in and noticing the connection between her love and her friend. Look for some conflict between these three going forward. Nicole won’t be happy to find out that her friend Sarah has moved in on Eric.

The DOOL promo also shows Brady Black (Eric Martsolf) and Nicole together. According to Days of Our Lives spoilers, Brady will return from a business trip to find out that Nicole is alive. He’ll be stunned, and Days spoilers say that he’ll be there to comfort Nicole after she learns that Holly Jonas (Harlow and Scarlett Mallory) has been kidnapped. Will we see these two get closer?

Nicole is also shown totally lashing out towards Chloe Lane (Nadia Bjorlin). Chloe has been taking care of Holly, and it looks like Nicole won’t be happy about that at all. And she especially won’t be happy to find out that Holly was kidnapped under Chloe’s watch.

Nicole will probably be stunned to find out that Holly was living at the DiMera mansion, and the stress of it all will cause her to snap at Chloe. Chloe is shown embracing Nicole, happy to see her again, while Nicole angrily tells her to “get your hands off me.” It looks like a bad scene, and DOOL spoilers say that Nicole will blame Chloe for Holly’s disappearance which DOOL spoilers tell us turns out tragically for the little girl.

Other parts of the promo reference Xander Cook’s (Paul Telfer) return to canvas. Days of Our Lives spoilers say that Xander will end up being Ted Laurent’s (Gilles Marini) partner in crime, and that the two of them will be responsible for Holly’s kidnapping. Look for some tense interactions between Ted and Xander this week as they discuss their plot.

Finally, the Days promo shows the return of Valerie Grant (Vanessa Williams). Abe Carver (James Reynolds) and Valerie have been having problems ever since Valerie moved to Washington, DC, to take a chief of staff job there. But Valerie will decide that it’s time to return to Salem to support Abe at the mayoral debate against Jack Deveraux (Matthew Ashford).

Abe will certainly be surprised by Valerie’s sudden appearance, but it looks like he’ll be happy to see her. However, Jack’s got something up his sleeve for the mayoral debate. The promo shows Jack at the debate projecting a photo of Abe and Sheila Watkins (Tionne “T-Boz” Watkins) kissing, while Valerie looks on, shocked.

It looks like Abe will have some explaining to do, both to Valerie and to his constituents. Look for Abe and Valerie to end their relationship after a long discussion. And Days spoilers say that Sheila will be so horrified by the turn of events that she’ll leave Salem, so viewers can prepare to say goodbye to her this week as well.

It sounds like we’re in for a big week! Stay tuned to DOOL and don’t forget to check CDL often for the latest Days of Our Lives spoilers, updates, and news.