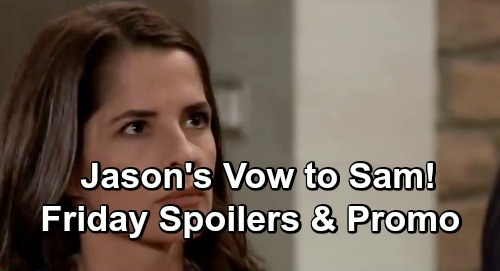 General Hospital (GH) spoilers for Friday, January 25, tease that Lulu Falconeri (Emme Rylan) will get a visit from her mom. At GH, Lulu will remain unconscious as Laura Webber (Genie Francis) sits by her bedside.

She’ll beg Lulu to wake up and finally ease the minds of her loved ones. The doctors are hopeful about Lulu making a full recovery, but opening her eyes is the first step.

Sonny Corinthos (Maurice Benard) will also stop by and urge Lulu to keep fighting. He’ll hope that she comes back to her family soon. Fortunately, Laura and Sonny’s wish will be granted. Lulu will awaken in the near future, but there’ll be a big snag in the investigation. She’ll have no memory of the attack, which means Ryan Chamberlain (Jon Lindstrom) will get away with it for now.

At least Jordan Ashford (Briana Nicole Henry) is still hot on the trail. She’ll have a chat with Anna Devane (Finola Hughes) on Friday as she tries to solve this mystery. Jordan was suspicious of Peter August (Wes Ramsey) the last time we saw her, but Anna will defend her son. She’ll also chime in about some evidence that was found at the crime scene.

It appears Jordan will show Anna a picture of the bloody footprint. A murder weapon was also found, so they know the killer wasn’t as smooth as usual. His plans went awry, so Jordan will have to wonder why.

Of course, GH fans know it’s because Ryan was hit with a splitting headache and ultimately went blind. That story connects to Anna as well, so it’ll bring Dr. Finn Hamilton (Michael Easton) and Robert Scorpio (Tristan Rogers) into it.

General Hospital spoilers say Robert will return to Port Charles on Friday. When he spots a familiar doc, Robert will tell Finn he’s just the man he’s looking for.

Robert will get updates on everything that’s been happening with Anna and Ryan. He’ll ponder the mystery virus and consider the best plan to get answers. In Ryan’s room, his bandages will be removed after surgery.

Ava Jerome (Maura West) will be there waiting to see if the procedure worked. She’ll ask if Ryan sees anything and it seems likely he’ll say yes. We know Ryan will get his sight back, so it might as well be now.

Other General Hospital spoilers say Maxie West (Kirsten Storms) will grow closer to Peter. She’ll ask what Peter “would’ve been focusing on this year,” so she must mean without all this serial killer drama. Maxie will try to lighten the mood and get to the bottom of Peter’s passions. She’s slowly letting herself fall for Peter, so they’ll continue down their path to romance.

Next, Sam McCall (Kelly Monaco) will have concerns. As Jason Morgan (Steve Burton) heads out of the penthouse, Sam will block the exit. She may feel like everything’s just too good to be true right now. Sam won’t want any of this to go away, so Jason will promise that this is real and he’s coming back. He’ll just have a few things to take care of.

Over with Elizabeth Webber (Rebecca Herbst) and Franco Baldwin (Roger Howarth), they’ll dive deeper into the topic of Aiden Webber (Jason David) possibly being gay. Franco will wonder if that would be a problem for Liz, but she’ll undoubtedly insist that it wouldn’t be. Liz is a kind, accepting person and mother, so this would never be an issue for her.

However, Liz may admit the possibility brings her more anxiety. The world can be cruel, especially when you’re in the third grade. Franco and Liz will seek advice next week, January 28-February 1, so stay tuned for more “Friz” family drama. We’ll keep you posted as other GH news comes in. Stick with the ABC soap and don’t forget to check CDL often for the latest General Hospital spoilers, updates and news.