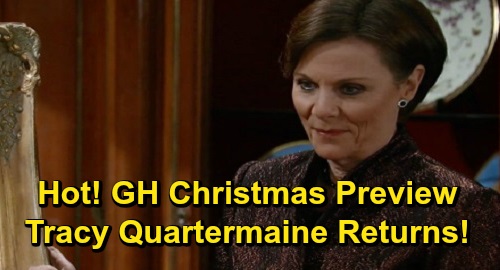 General Hospital (GH) spoilers reveal that Christmas is just around the corner, so it’s time to start preparing for the holidays in Port Charles. During the week of December 23-27, there’ll be some exciting things to look forward to. We’ve got the scoop on what to expect as Christmas draws near, so let’s dive in and see what’s coming up in PC.

For starters, there’ll be a twist in the episode that’s set to air December 23. General Hospital will explore some Dickensian themes – meaning the stories will be reminiscent of Charles Dickens’ well-known work. We’ll see some characters facing severe hardships, but there’ll be some valuable lessons and most likely a few Scrooges, too.

Could GH deliver an alternate reality and show PC residents what life could’ve been like if they’d made different choices? That’s one option to consider. It’s worth mentioning that Nelle Benson (Chloe Lanier) will be unrelenting in this episode. Perhaps she’ll be determined to get out of Pentonville by Christmas or if this is indeed a fantasy show, Nelle could be free and causing chaos as usual.

Of course, if Nelle is actually free by then, you can bet she’ll be pestering Brad Cooper (Parry Shen) about “Wiley Cooper-Jones” aka Jonah Corinthos (Erik and Theo Olson). Nelle won’t let Brad keep her from her child, so his nightmare will inevitably get worse.

GH buzz also points to Hamilton Finn (Michael Easton) learning a lesson or two in this special episode. Will Violet Barnes (Jophielle Love) help Finn out with that? Regardless, General Hospital fans are hopeful we get some sweet Christmas moments for this daddy and daughter. Finn and Violet really are adorable in their scenes together!

However, the festive fun won’t stop there. General Hospital spoilers say it’ll still be Christmas on December 26 in Port Charles. Tracy Quartermaine (Jane Elliot) is set to be back in time for the holidays, so she’s sure to stir up some trouble.

That might be why Monica Quartermaine (Leslie Charleson) is content in the December 26 episode. Deep down, Monica likes the drama! She proved that at Thanksgiving, so there’s no reason Christmas should be any different. There’s always plenty of mayhem erupting at any Quartermaine family gathering.

Next, Josslyn Jacks (Eden McCoy) will battle confusion. Could that have something to do with her feelings for Dev Cerci (Ashton Arbab)? They definitely grew closer after Dev helped Joss with Mike Corbin (Max Gail) at Turning Woods, so Josslyn may be confused about where things stand between them.

As for Cameron Webber (William Lipton), he should be thrilled to have the “Friz” fam all back together. It looks like Franco Baldwin (Roger Howarth) will enjoy a merry Christmas with Elizabeth Baldwin (Rebecca Herbst) and the boys. Over with Jordan Ashford (Briana Nicole Henry), she’ll hope for the best. Perhaps that’ll involve the investigation and pursuit of justice for Lucas Jones (Ryan Carnes).

Speaking of Lucas, there’s a good chance he’ll be why Carly Corinthos (Laura Wright) is distraught around Christmas Eve. Sonny Corinthos (Maurice Benard) will comfort Carly, but she’ll just want Lucas to wake up and come back to them. If GH is handing out Christmas miracles this year, it seems likely Lucas will get one!

Finally, Danny Morgan (Porter Fasullo) will pay a visit to Santa Claus and perhaps ask for some holiday magic. His wish may be for his mom to come home, but sadly that’s not up to Santa. Jason Morgan (Steve Burton) will stay strong for Danny and Scout Cain (Ella Ramacieri), but it’s clear a “JaSam” family reunion is desperately needed. Let’s hope Sam McCall (Kelly Monaco) will score her freedom in time to celebrate.