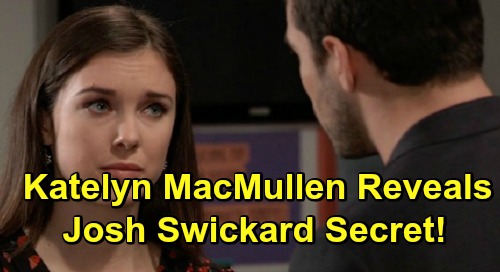 General Hospital (GH) spoilers reveal that things could get complicated for Willow Tait (Katelyn MacMullen) and Harrison Chase (Josh Swickard) down the road. However, many GH fans are certainly loving “Chillow” and their fabulous chemistry. They’ve been a surprising couple that captured viewers hearts, especially after that adorable Nurses Ball performance.

Chase’s recent arrest of Willow was another highlight. These two just have the ability to light up the screen and pull you right into the drama. Since Willow and Chase work so well as a pairing, you might be wondering how MacMullen and Swickard create the magic. What’s their secret to making “Chillow” so sweet and sizzling?

That’s tough to nail down, but MacMullen does have an answer for what she likes most about her leading man! In the latest issue of Soap Opera Digest, MacMullen talked about working with Swickard and what they bond over. It turns out there are two fun things that make them great scene partners.

“My favorite thing about working with Josh would have to be our mutual love of food,” MacMullen admitted. “And we have very similar senses of humor, so it’s always a good time!” Perhaps their solid working relationship helps them deliver the chem and connection that fans love so much.

GH watchers have been longing for more romance on the show, so it’s been nice to get out fix through Willow and Chase. General Hospital would be wise to add some other hot couples to root for, but we’ve got “Chillow” and a few others to satisfy us for now.

Michael Corinthos (Chad Duell) and Sasha Gilmore (Sofia Mattsson) have won over some fans as well, but they be doomed thanks to Sasha’s secrets. Since Michael’s already been burned by too many lying women, he may not be able to get past Sasha’s daughter deception. Once Michael’s free again, will he pull Willow closer? Plenty of viewers are worried Chase is going to get his heart broken!